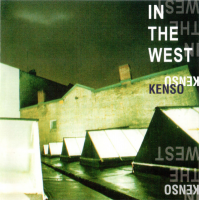 In the West is a live, studio-ready recording from On the West, Tokyo performances of Kenso in Sep 1997. This excellent recording showcases a group that perfectly dances the knife-edge twixt progressive rock and jazz fusion. At times they remind me of Return to Forever and then The Dixie Dregs. Even hints of Happy the Man are detected. Kenso is a well-kept Japanese secret to most fusion fans.

Guitarist Yoshihisa Shimizu handles the fret board like Steve Morse and Stanley Whitaker. I even hear Scandinavia's Finnforest or Spain's Iceberg visceral-fusion, axe attack in Shimizu's phrasings. Expect loads of keyboard interplay and unison lines. Compositions are complex, engaging, twisting, stop-n-go flourishes. A myriad of time-sigs make this weave of sound an astonishingly intricate mosaic of textures. Not one but two keyboardists add to the punch and fullness of Kenso's sound. Kenichi Oguchi and Kenichi Mitsuda are a fine team of synth players. Both Shimizu and Oguchi pen songs with Shimizu creating 12 of the 14 songs. Each song's a beautiful aural experience, transporting the listener through virtuoso jazz fusion and superbly structured, progressive rock — Mahavishnu Ork-ish one moment and Yes-like the next.

Shunji Saegusa is Kenso's memorable bassist and Masayuki Muraishi demolishes the drums like a good fusion/progger percussionist should. I refuse to recommend any track over the next. They each have their own special merit. For high-energy, serious soul-fired tunes that will be a collector's item one day I heartily recommend Japan's Kenso.