John Hines: In the Pocket

By Dan McClenaghan
April 18, 2004
Sign in to view read count 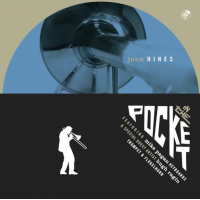 The title tune on trombonist John Hines' In the Pocket had me mulling over comparisons with—of course—the late trombone master J.J. Johnson. And I felt that where Mr. Johnson romanced the listener, charmed the ears with subtle sweet somethings, John Hines' approach was more like a sermon—an upbeat, life-affirming, straightforward exhortation. A fine, driving piece of mainstream jazz.

With tune two, the classic "I Could Write a Book," I knew something not just good, but really special was happening. Horn man Hugh Ragin joins the 'bone and rhythm section quartet here, slicing Hines' deep straight-ahead take on the melody with with a knife edge of muted trumpet cuts on a relaxed and fluid take on the song.

"My Secret Love," with a Latin groove to it, continues the mood; and then John Coltrane's "Central Park West" led me to suspect I had a disc in hand that might just qualify as a classic—as good as this mainstream thing gets. On this gorgeous song the three lead voices—Hines' trombone, Ragin's trumpet, and Michael Pagan's piano, in that order—perform, one after the other, magnificently, a transcendent display of inspired improvistational viruosity, each voice building on the impromptu statements predecessor; and I can't say enough about pianist Pagan's part. His buoyant, Count Basie-like accompaniment (swelling to eschew the Basie-esque reticence) behind Ragin's breathtaking trumpet solo lifts the music to a higher plane; and when he gets his spot, things go to a level I didn't suspect existed. And all of that is not to take away from Hines' opening statement that sings like a low register angel to get the process rolling.

"A Nightingale Sang In Berkeley Square" invites vocalist Angela Holley into the mix, with her velvety deep timbre—a B flat clarinet crooning down in its low register—on a straight forward delivery of a not-done-often-enough classic that adds a dash of rich spice to the mix.

A wonderfully executed set, paced to perfection, with a vibrant trombone sound out front, a flexible rhythm section, a pianist whose crisp, bright sound counterpoints the leader's mellifuous low tones, and some knockout guest slots on trumpet/flugelhorn and vocal that slip right into the pocket. And they close with Ellington's "In a Sentimental Mood," loose and late night-sounding, nothing to lose or gain, just good music.

A top ten of the year disc, no ifs or maybes. In that better alternate universe where jazz dominates the music charts, In the Pocket would be all over the radio.

Visit Capri Records on the web at www.caprirecords.com .

In the Pocket, I Could Write a Book, Secret Love, Central Park West, Hard times, A Nightingale Sang in Berkeley Square, More Than a Friend, Kickin' Back, In a Sentimental Mood