Bob Mintzer Quartet: In the Moment 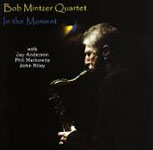 Horror writer Stephen King once wrote that you can drink vintage wine out of a piece of fine crystal or out of a Flintstones jelly glass. The drink is the same but there is a difference. In the realm of mainstream jazz, there's a similar difference between playing all the right notes and actually meaning them. Given the number of mainstream records released every year it's a challenge to separate those that speak the truth from those that simply speak. Saxophonist Bob Mintzer's In the Moment is a clear case of a fine drink in an equally fine glass.

More often than not, when not recording and touring with the contemporary Yellowjackets, Mintzer's own projects have focused on larger ensembles, like Old School: New Lessons (MCG Jazz, 2006) and Live at MCG with Kurt Elling (MCG Jazz, 2004), both with his longstanding big band. In the Moment keeps things small and simple, with a crack quartet featuring pianist Phil Markowitz, bassist Jay Anderson and drummer John Riley. It may not rattle any cages, but it's a thoroughly captivating set of Mintzer originals, with one tune by Markowitz and a couple of covers thrown in for good measure.

There's plenty of straight-ahead swing on the aptly titled "Straight Ahead, with Anderson and Riley sticking to traditional roles but remaining responsive in ways that are more often felt than heard. Anderson also takes a well-constructed solo that begs the question of why, when he's appeared on over two hundred recordings since the late '70s, is he not better known outside of musician circles?

Elsewhere Mintzer mines modal territory ("Aha ), gentle balladry ("Simple Song ), mid-tempo "I Got Rhythm changes ("What's the Word ) and light bossa ("Play Pretty ). Markowitz is a player with an encyclopedic knowledge of the tradition and just enough zest to set it subtly on edge now and again. Economical without sacrificing energy, he provides meaningful pushes that underscore Mintzer, while being equally adept at solos with substance.

The quartet swings comfortably on the Styne/Cahn standard "Time After Time and brings out some soulful funk on the Eddie Harris staple, "Listen Here. Mintzer's "Blues is, indeed, a conventional albeit soulful blues, with Mintzer making a difference by leading the quartet on bass clarinet.

Mintzer manages to combine a stylistic physicality, regardless of context, with a thoughtful approach that avoids overstatement. Lyrical, lithely swinging and with nothing to prove, Mintzer's In the Moment makes it clear that there's plenty of room for unassuming straight-ahead jazz, as long as it's played from the head and heart.