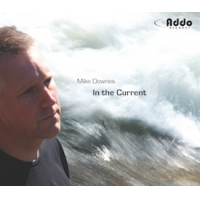 In the Current, the fifth recording as leader by Canadian bassist Mike Downes—who doubles as composer / arranger—is the second (in a row) with an aqueous theme and the first performed by his "little big band," the Parallel Streams Ensemble. Downes' album Ripple Effect, recorded with his trio and special guest guitarist Ted Quinlan, earned a 2014 Juno Award as Canada's Best Traditional Jazz Album of the Year.

The centerpiece of Downes' latest enterprise is the In the Current Suite, which comprises the first half of the album. In it, Downes shows a keen ear for melody and phrasing, as he does elsewhere, and his charts are contemporary in the best sense of the word. While none of the tunes is memorable (you're unlikely to be humming them later), each one is well-designed and altogether charming. As a composer, Downes likes to set sail quietly and build toward stormy crescendos, a tack that well suits his versatile eleven-member ensemble, several of whose members double, triple or more. That's the way it must be, as Downes' sophisticated charts call for everything from conventional brass and rhythm to flute, clarinet, bass clarinet, F/Bb horn, descant horn and percussion. For comparison's sake only, think of Maria Schneider or her mentor, Gil Evans, to whom "Re-emerging Linear Tones"—an anagram derived from Evans' given name, Ian Ernest Gilmore Green —is dedicated.

On arrangements such as these a strong pianist / keyboardist is essential, and sure-handed Brian Dickinson proves the right man for that task, while Downes and drummer / percussionist Mark Kelso round out the group's admirable rhythm section. Quinlan is here too, as he was on Ripple Effect, and solos eloquently on the suite's final movement, "Re:currents," and the pacific ballad "Soleil Couchant." The name of the suite's second movement, the unhurried "Parallel Streams," echoes of that of the ensemble, while the fourth, "Still Waters Run Deep," has a foghorn-like opening (descant horn?) that leads to an enchanting melody and expressive tenor saxophone solo (either Shirantha Beddage or Kelly Jefferson). It isn't until the bracing finale, "Elation," that Downes loosens the reins and lets the ensemble sprint to the finish line, spurred on by Beddage's brisk baritone sax solo and emphatic statements by Kelso and trumpeter Jonathan Challoner.

From stem to stern and port to starboard, "In the Current" proves more than seaworthy, and it's smooth sailing all the way for Downes and the Parallel Streams Ensemble. Another Juno Award? It's clearly not beyond the realm of possibility.