By Roger Farbey
November 8, 2018
Sign in to view read count 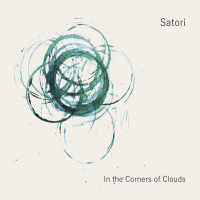 It's interesting to compare In The Corners Of Clouds with Josephine Davies' previous album simply entitled Satori (Whirlwind, 2017). That live album was recorded at a gig in London in 2016, whereas In The Corners Of Clouds was recorded at Buffalo Studios, London in February 2018. The line-up has changed slightly too with Paul Clarvis replaced by James Maddren on drums, but essentially both share the attributes of consistent inventiveness.

The serpentine, Eastern-inflected "Wabi Sabi" catches and holds the listener's attention, and the alternately ascending and descending melody of the title track, underpinned by Dave Whitford's resonant bass, transcends its superficial lugubriousness, forming itself into an elegant and mesmeric chant. The catchiness of the sprightly head and bouncy rhythm on "Oddities" is piquantly attractive, Davies' tenor sparring deftly with the bass and drums. "Lazy" however brings a change in the methodology with the saxophonist double tracking her tenor to bring some contrapuntal diversity to the recording.

A trio without the benefit of either a chordal instrument or additional melodic instruments to create harmonic structure can be challenging and difficult. Arguably, it demands more concentration and discipline, but paradoxically it can create opportunities for greater freedom. Even the great innovator Ornette Coleman only made rare forays into the sax, bass and drum trio setting, as heard on his highly acclaimed At The "Golden Circle" Stockholm (Blue Note, 1965). However, to some a sparse format is ideal, a structure in which the late British virtuosic altoist Mike Osborne was wont to perform. His music was intense and brilliant and made an excellent template for this kind of jazz. With In The Corners Of Clouds Davies proves her own trio configuration to be refreshingly imaginative and invigorating.

Wabi Sabi; Song Of The Dancing Saint; In The Corners Of Clouds; Oddities; The Space Between Thoughts; Cry; Lazy; Scattered.