By David Rickert
November 9, 2008
Sign in to view read count 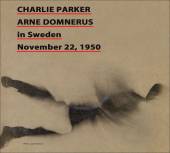 Charlie Parker certainly had his share of imitators, some of whom adopted his destructive lifestyle in hopes that it was the key to his success. One who stayed clean became one of the best (and least known) of the Parker disciples: Arne Domnerus.  He was also fortunate enough to share a concert with Parker, released as In Sweden - November 22, 1950.  Although the two didn't play together, both sets are filled with intense, delicious bebop.

For the first half of the concert, Parker is joined by Rolf Ericson on trumpet and a rhythm section of native Swedes who, like many Europeans, were weaned on jazz records. They are more than capable of holding their own with Parker, who as always shows a dazzling ability to spool out solos that have a logic and flow that no one can match, reminding the listener of why he was such a genius. For his part, Ericson plays like there is no tomorrow and turns in a blistering performance, no doubt emboldened by the talent on stage.

For the last three numbers, Parker is replaced by Domnerus.  While not quite as inventive or nimble as Parker, Domnerus has his own take on the master.  Domnerus' playing is more extroverted and bright, and is just as interesting as his hero's.

The sound on this recording is a notch above many other Parker concert recordings.  While the fidelity is not great, all the instruments come through clearly, and the quality of the recording does not detract from the listening experience.

Domnerus was probably content to just be compared favorably to Parker, at least at this point in his career, rather than being considered a talent in his own right.  He is proof that not all of the best jazz was played in the States.