By Ian Patterson
November 26, 2009
Sign in to view read count 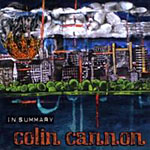 In Summary may seem like an odd title for Colin Cannon's debut recording and the beginning of a musical journey; but as the liner notes attest, this music is the result of his every positive and negative experience of the last five years. To make music any other way would be to leave part of himself out of the creative process, and what comes through is the personality of Cannon as guitarist and composer, which is perhaps his greatest achievement on this CD.

First impressions can be deceptive, and on the strength of "Berklee Cage" it might be concluded that Cannon is a fusion guitarist given to shredding. His guitar solo is indeed fairly wild, testing the limits of his instrument; but there's an unmistakable musicality within his playing, and above all in the heart of the composition. The lyricism and melody that permeate these songs, and Cannon's keen sense of harmony, recall on more than one occasion Pat Metheny. Shades of the Missouri guitarist are more keenly felt in Cannon's acoustic playing, which has a decidedly pastoral feel, as on the beautiful miniature "And Again."

Stylistically, the songs are diverse, ranging from the rip-roaring to the introspective and from the straight-ahead to more modern-influenced. The gently humming static pulse and nostalgic crackle of a stylus on old vinyl accompanies acoustic guitar on the atmospheric "For the Record," which fades away in a slightly Spanish mood. On "Clarity in the City," Cannon employs dreamy echo effects on this guitar-only composition. The use of echo on bass, piano and guitar is heard again on the lively "Truffaz," adding a kind of reverie to the music. That the same song contains a guitar solo that sounds like a fax machine gone berserk says something for Cannon's sense of juxtaposition—there is a boldness about these compositions.

Cannon is ably supported by his band members. Zak Croxall's spare, thoughtful bass contrasts with the speed and intensity of Cannon's more exuberant solos, as well as Tom Hartman's impressive and animated drumming. Whether on sticks or brushes, Hartman really earns his crust, coloring the music with pressed rolls, cymbal shots and little touches that add greatly to the music. Pianist Manami Morita, whether comping or venturing out, acts as a foil for Cannon in much the way that Lyle Mays does for Metheny. Morita's very pretty intro to "M.C.B." gives way to some lovely syncopated interplay with Cannon, and the two dovetail like birds at play on one of the most impressive pieces on the CD.

The title track sees Cannon's gentle six-string ruminations act like bookends on a melodic piece whose intensity grows slowly but surely. His solo winds its way impressively, gaining in power and exhibiting flashes of technical prowess; but this is one of his more restrained solos, and all the more impressive for it.

Colin Cannon is a fine guitarist and composer of some maturity and this highly satisfying debut suggests that more shall be heard of him in the future.

The Berklee Cage; Dear Lydian; For the Record; The Slug; Clarity in the City; Truffaz; A Fading Cause; M.C.B.; And Again; In Summary.