In Jazz We Trust: On The Politically Inspired Work Of Delfeayo Marsalis and Ted Nash 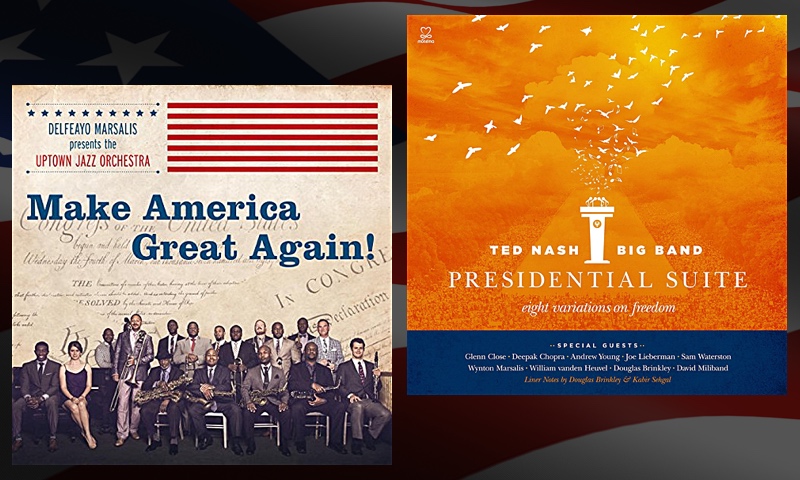 By DAN BILAWSKY
October 2, 2016
Sign in to view read count
The current state of American politics—a veritable cesspool that makes reality television seem sane by comparison—leaves little to feel good about. Moral compasses are skewed, elected officials bicker like fractious toddlers, and candidates ranging from the lunatic sybarite variety to the bumptiously insincere seek the highest office in the land with strong approval from the loud and entrenched in opposing corners. It's enough to make you cry, sigh, and check out completely. But before you withdraw from any discussion of politics, it might be worth taking a look at these two albums. One seeks to turn a present-day political tag on its head and the other takes root in the contributions of great orator-politicians, both foreign and domestic. Were it not for the American political landscapes of today and yesterday, neither of these works of fine and different art could or would exist. 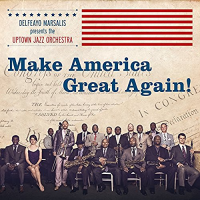 Don't misunderstand the title of this record. While trombonist Delfeayo Marsalis may have lifted Donald Trump's campaign line, he's certainly not aligned with the man or his way of thinking. Quite the opposite, in fact. Marsalis uses the phrase as one to chew on and brew on, reclaiming and reframing it for us while pointing out what should be obvious yet still bears stating: the true olden days weren't really such golden days, our strength rests in diversity, and freedom, double-edged sword though it may be, is the essential ingredient in the recipe that keeps America great, or at the very least, on the track toward greatness.

With Make America Great Again!, Delfeayo Marsalis and the Uptown Jazz Orchestra hold up a mirror that reflects serious truths while simultaneously delivering infectious music to make America groove again. There are moments here that give pause for reflection and serious thought—a reharmonized "Star Spangled Banner" that speaks to promise, pain, and possibility; the Wendell Pierce-narrated title track which gives a warts-and-wonders appraisal of American greatness; a pretty and purposeful "Skylark" with Marsalis at the helm; an inspiring, jazzed-up journey through Aaron Copland's "Fanfare For The Common Man"—but they never weigh the album down.

Marsalis has a way of always spreading joy, even while shedding light on the not-so-pleasant realities of our time and our ancestors. Songs like "Back To Africa" and "Living Free And Running Wild," both featuring the Uptown Music Theatre Choir and some thought-provoking rap vocals from Dee-1, clearly bear that out. And then there are those songs of pure positivity, like "All Of Me," Allen Toussaint's cheery "Java," Rebirth Brass Band's hip-shaking "Put Your Right Foot Forward," and Benny Carter's swinging "Symphony In Riffs." Whether the attention to balance of emotions here is intentional or simply a byproduct of NOLA in Marsalis' soul is ultimately irrelevant. The fact that it's there is what makes this album a real treasure. 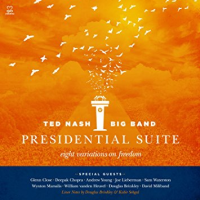 Ted Nash's Presidential Suite isn't plugged directly into today's political circus. Instead, it taps into classic political speeches of the past, using the vocal cadences and thematic lines of iconic world leaders as seeds of inspiration and beacons of intention.

Nash transcribed the rhythms and notes of eight historic presidential orations and birthed musical art from those fruits of his labor. John F. Kennedy's inaugural address from 1961 yielded the bluesy "Ask Not"; Jawaharlal Nehru's address at the dawning of India's independence brought about the modal, odd-metered "Spoken At Midnight"; Ronald Reagan's firmly-delivered speech from Berlin in June of 1987 found musical voice in the resolute, through-composed, brass-strengthened "Tear Down This Wall"; and Lyndon B. Johnson's 1965 statement born in the wake of Selma's Bloody Sunday comes to life as "The American Promise," a composition that offsets free jazz sensibilities with solid riffs, swinging stability, and a dose of cowboy charm. Landmark speeches from Franklin D. Roosevelt, Nelson Mandela, Aung San Suu Kyi, and Winston Churchill round out the list and lead to other musical riches of various designs.

While Nash could've simply delivered the music and left it at that, he went one better: he invited eight different notable figures to recite the speeches associated with each composition, allowing each to essentially serve as a preamble to the piece it helped to create. Joe Lieberman, in a nod to the man who inspired him to pursue public service in the first place, reads John F. Kennedy; David Miliband, the former Secretary of State for Foreign and Commonwealth Affairs for the United Kingdom, communes with Winston Churchill's words; and actress Glenn Close reads Aung San Suu Kyi, bringing strength of spirit to the Burmese leader's succinct statement. The list also includes presidential historian Douglas Brinkley, wellness guru Deepak Chopra, and actor Sam Waterston, among others.

The booklet that accompanies this album proves to be essential reading, offering details and backstories for each speech, highlighting the manner(s) in which Nash crafted his music from his dictations, touching on each guest speech reader's gifts and contributions, and providing a timeline that puts these presidential statements in chronological context. A second disc—a bonus, but not a necessity—allows the music to flow, piece-to-piece, without the presence of the speeches in between. The ingenuity of this work shines through regardless of which way you take it in. Jazz-informed listeners looking for a path to renewed faith in the American spirit need look no further. Art like this, and the aforementioned Delfeayo Marsalis album, help to make America great.