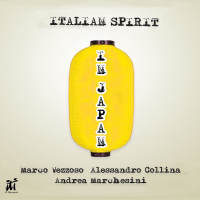 Italian Spirit began in 2014 as a duo featuring pianist Alessandro Collina and trumpeter Marco Vezzoso, instructor at the National Conservatory of Nice. Their name refers to their repertoire: classic, traditional and contemporary songs designed to revive and inspire emotions in Italians far from home. Collina and Vezzoso have performed extensively from west to east; Live in Osaka was recorded and released by a Japanese label from their first tour of Japan in 2015, and in 2019 they represented Italy at the first (Canton) European Jazz Festival in China.

Italian Spirit virtually returned to Japan with percussionist Andrea Marchesini in March 2021, through a live stream performance of beautiful Italian songs interpreted by their infant instrumental trio. In Japan captures ten of these songs. Their beauty is genuine, subtle yet strong, whispered softly but landing in your ear like a shout.

"The Winter Sea (Il Mare D'Inverno)" opens with crashing waves of piano and percussion which slowly ripple and then recede for the trumpet. Those piano ripples gradually grow into a cascade of waterfalling melody, powering trumpet verses that glimmer and glow with the Chuck Mangione type of warm and bright sound that can make your heart, mind and soul "feel so good." "Diamond (Diamante)" brilliantly illuminates the telepathic empathy between these three musicians; listen, for example, as the percussion pops up in just the right place for the pianist, as the piano notes rise and fall in the same breath as the trumpet, and as that trumpet's beautifully lyrical sound washes like flowing water over its accompaniment.

Pianist Collina plays elsewhere with a brightness and lightness that suggests Vince Guaraldi, including and especially the cheerful and friendly sound of Guaraldi's music for Peanuts. He opens "Under The Fish Sign (Sotto Il Segno Dei Pesci)" with a melody that gorgeously reflects its title—it floats, it dives, it swims, it moves with liquid grace, so gentle and graceful and yet so purposeful.

"I Like 'O Blues (A Me Me Piace 'O Blues)" stuffs a ton of musical fun into less than four minutes (and some funk, too). The arrangement somehow transforms three instruments into the full sound of an orchestra, with an occasional messy, smeared sound on Vezzoso's trumpet that calls up the sounds of Bubber Miley or Cootie Williams messing with the blues in the Count Basie band.