Memorize The Sky: In Former Times

By Clifford Allen
December 20, 2008
Sign in to view read count 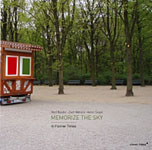 Reedman Matt Bauder, percussionist Aaron Siegel and bassist Zach Wallace have worked together for almost a decade, but In Former Times, recorded live in Austria at the Ulrichsberger Kaleidophon, is only their second full-length disc. Siegel is, in addition to applying his pared-down kit of snare, bass drum and vibes to this recording, a composer of electronic music. Though one might, from the instrumentation, assume this to be another power trio/free-bop outing, Memorize the Sky focuses on sparse and often droning chamber improvisation somewhere between Morton Feldman and the "sustain" pieces of the Spontaneous Music Ensemble. This approach has been coined "lowercase" improvisation, of the brand practiced by saxists Jack Wright and Bhob Rainey or percussionist Sean Meehan. However, this trio somehow manages to turn small gestures into very large sonic areas.

The set starts with rumbling press rolls as Bauder's tenor pulses with energy alternately pillowy and gruff, Wallace's arco harmonics heaving underneath. Though the architecture may seem narrow, the trio is able to weave a warm and enveloping largeness, a specificity that must have filled the concert hall's every nook. Low purrs and gauzy subtones recall Bill Dixon in aesthetic, if not in organizational intent (indeed, Bauder has worked with Dixon through the Exploding Star Orchestra). At six minutes in, the tension subsides rather than releases, a brief pocket of bass drum rattle before Bauder returns with more sparsely-placed muted tones and, amid bells and (drum) head rubs, Wallace picks up the repetitive ken with a driving col legno figure. "I Am the Founder of this Place" finds high, jittery harmonics and bull fiddle at the fore, a canopy of metal from ringing alarms and vibraphone popping out like floaters on a color field. These spatial relationships, as well as subtle shifts in timbre, are the essence of the trio's rhythm. Memorize the Sky deserves wider recognition as their alphabet includes a broad range of sonic fonts.

Did I tell you?; The sun is going down; I am the founder of this place; Treat me like a picture; In former times.