In Concert with Harry Connick, Jr. 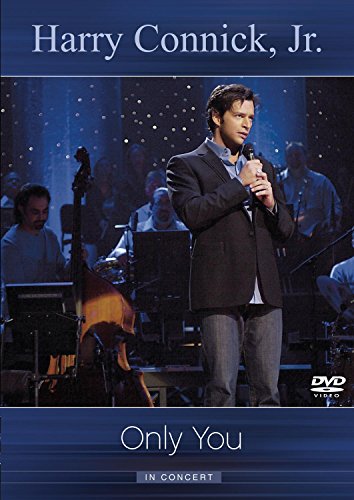 Harry Connick, Jr.
Only You
Columbia
2004

Dressed casually, with shirttail hanging out over the top of his jeans, Harry Connick, Jr. gives his audience a full night of fun. The members of his big band, with open shirt collars and a relaxed demeanor, share both the camera and the musical arrangements. It's big band swing with a heart of pure gold.

Songs from his Only You album, and selected others, give the performance a personal touch. Connick is in fine form. Every time tenor saxophonist Jerry Weldon stands up for a passionate solo, you realize that the singer's musical mission has made its mark. It's all about melody, and Connick delivers with a genuine spirit. Superb camera work and excellent microphone balance make it easy to absorb the concert's full effect. You can see everybody, as the camera moves smoothly in and out. The clarity helps you to capture the moment and feel fulfilled.

'Shucks,' says the leader, with his down home manner. He introduces soloists and talks with the audience, maintaining rapport all evening long. He's got the right stuff. At the piano, he keeps things simple. There are plenty of opportunities, and Connick likes to get into the instrumental side of his music. But the evening is meant to be suave and uncomplicated. His soloists also keep the evening in perspective, preferring mellow soliloquies that emphasize the program's romantic theme. The entire evening is a pleasant one.

Ned Goold attempts to add a little spark to 'The Very Thought of You,' but his creative attempt ' a distorted, multiple-toned hue ' comes across as if it were a muff. Connick honors Ray Charles with his interpretation of 'You Don't Know Me' with strings. His brief piano interlude gives the song a traditional taste that lasts. Leroy Jones' vocal duet with Connick on 'Bourbon Street Parade' lights up the house. He and trombonist Craig Klein give it that 'old time religion' kick. Their wireless microphones give the soloists much freedom and give the performance yet another dimension. Free from the restraint of a static mic', they're out front pumping up an emotional affair. Jones steals the show. He also joins Connick on flugelhorn for a beautiful arrangement of 'There is Always One More Time.'

Connick's solo piano interpretation of 'Sweet Georgia Brown' reveals his love of the New Orleans shuffle rhythm and all of its history. With his foot, he stomps out a traditional pattern that drives the feeling home. He adds more, with hands on the piano's top, and gives the listener a full landscape of what the Crescent City is all about. The mood flows from him quite naturally. Jazz is deeply ingrained in his soul. There's even a spontaneous 'Habanera' quote.

This program first aired on WNET's Great Performance series on PBS. The DVD contains an additional 30 minutes of music not previously broadcast. Audio and video samples are available from Connick's web site .

Track Listing: Save the Last Dance For Me; For Once in My Life; Good Night My Love; It Might As Well Be Spring; We Are In Love; The Very Thought Of You; You Don't Know Me; Bourbon Street Parade; (There is Always) One More Time; Sweet Georgia Brown; I Still Get Jealous; Other Hours; My Blue Heaven; Only You (and You Alone); I'm Walkin'; Come By Me.