The Kenny Davern Quartet: In Concert at the Outpost Performance Space, Albuquerque, 2004

By FLORENCE WETZEL
December 7, 2005
Sign in to view read count 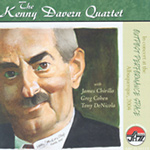 Now in his 70s, Kenny Davern is a modern master of the clarinet, and his playing is an example of the effortlessness that comes only from decades of effort. This release finds him in the good company of guitarist James Chirillo, bassist Greg Cohen, and drummer Tony DeNicola on eight classic songs that radiate the pure, toe-tapping pleasure of jazz.

In the liner notes Davern is quoted as saying that he was initially attracted to the clarinet because it was "like a bird that was free and able to fly." Davern's playing embodies this flight, particularly his work in the high register, where he hits stratospheric notes with no loss of fluidity. Davern illustrates this beautifully on Ma Rainey's "C.C. Rider," where he starts off silky smooth and ends up soaring off the map. The song also showcases the band at its bluesy best, including a funky bass solo by Cohen. Another gem is "Somebody Stole My Gal," where Davern plays with an easy swing, his phrasing exquisite and his tone clear as a bell. Davern interweaves nicely with Chirillo's mellow grace and deft fingerwork.

The recording also features two ballads. "These Foolish Things" is soft and romantic, with Davern's playing tastefully understated; and Davern finds the languid, melancholy heart of "Summertime." The band plays wonderfully on the latter tune—Chirillo's solo is gentle and precise, Cohen's bass a resonant heartbeat, and DeNicola's drum work soft as a whisper.

Arbors is devoted to classic jazz, and Davern has benefited from this vision. He now has ten releases on the label, and with any luck, there'll be more to come.