Chameleon Trio: In Between

By Brad Glanden
February 1, 2007
Sign in to view read count 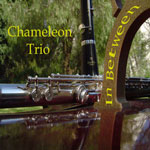 Israel is becoming known for an increasing number of talented improvisers. Many of them are emigrating to New York, where jazz venues abound and the potential for visibility is greater. Thankfully, there are plenty of superb musicians remaining in Israel, where the admittedly youthful jazz scene is growing steadily.

The Chameleon Trio is not strictly a jazz combo. Flautist Dvir Katz's compositions are equally derived from 20th Century harmony, and the group's credentials are all over the map; Katz, clarinetist Nitai Levi, and bassist Ora Boasson-Horev are schooled musicians whose resumes boast dalliances in everything from Baroque music to progressive rock. In the absence of percussion or a chordal instrument, the trio makes the most of its timbral scope, and the instruments chosen provide an ideal balance between high, middle and low.

What is most alarming about the group's debut, In Between, is the range of emotions that it explores. Katz's compositions are witty and ingratiating, and the players clearly have a sense of humor. On "Greedy," for example, the flute plays variations on a tune that should be familiar to cell-phone users, while the bass rendering of Brahms' "Lullaby" is decidedly too weird to play for children at bedtime. However, just as often the music turns mournful, sometimes even menacing; this is largely the work of Boasson-Horev, whose arco improvisations are eerie at times, brutally aggressive at others.

The twenty-minute centerpiece, "Why?", is particularly noteworthy for Boasson-Horev's emotionally exhausting solo. Levi and Katz also play their hearts out on this track, with the latter singing along with his instrument to produce an odd, kazoo-like effect. Such moments of playful exploration abound throughout the disc.

In Between is a beautiful, deeply felt work. Unlike the animal that bears its name, the Chameleon Trio is destined to stand out from the crowd, both in Israel and abroad.

Title: In Between | Year Released: 2007 | Record Label: Self Produced