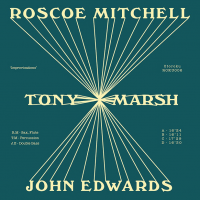 Not content with existence as a cutting edge venue for experimental music of all kinds, London's Cafe Oto has also launched its own record label OTOroku, documenting some of the stellar performances in the space. For their sixth release, they have selected material drawn from a 2 day residency by renowned AACM and Art Ensemble Of Chicago reedman Roscoe Mitchell. In a continuation of a favorite Oto tactic of matching acclaimed guests with the cream of local improvisers, Mitchell meets for the first time drummer Tony Marsh and bassist John Edwards, on Improvisations, a double LP also available as a download.

Mitchell is renowned for his almost superhuman focus and intensity. He once famously subdued a hostile audience at Willisau in Switzerland by playing the same nine-note theme until they lapsed into attentive silence, as chronicled on his classic Nonaah (Nessa, 1977). No such problems here, but once again Mitchell excels in generating subtle variations of timbre, tone and line. Edwards demonstrates why he is bassist of choice for many visitors to the capital, displaying huge energy and chops. Marsh, who unexpectedly died in April 2012, a month after this recording, plays an extended percussion set up rather than his more accustomed trapset, enhancing his timbral palette, though at the cost of removing kick drum and hi-hat polyrhythms from his arsenal.

Each of the four sidelong cuts follows a similar trajectory, from quiet atmospheric openings notable for their restraint to full blown expostulation by the saxophonist over an inventive bass and percussion latticework, leading to a gentle wind down. But in doing so the trio illustrate the broad range of expressive potential inherent in the format. "B" begins in a delicate tracery of sweetly slurred soprano saxophone, buzzing bow work evoking an insect drone and pattering brushes, before Mitchell moves into a siren like register with piping falsetto asides.

Although Mitchell leads from the front, he proves receptive to changes in dynamics wrought by the British pair, Edwards in particular. On "A" Mitchell unfurls a deliberate skirling line which imperceptibly becomes continuous as he establishes his mastery of circular breathing (something he does throughout) to create a serpentine roller coaster. But when Edwards switches to a dancing rhythm he prompts a staccato break from the hornman, before the piece decrescendos to nothing. Elsewhere the bassist's wavering arco blends pleasingly with Mitchell's ululating reeds. At 66-minutes the package forms an uncompromising but ultimately rewarding recital which stands proud in the American's recent discography.