By Tyran Grillo
February 2, 2018
Sign in to view read count 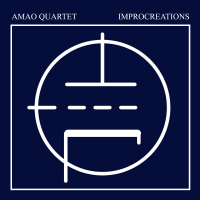 The Amao Quartet, hailing from southern Brazil, consists (at the time of recording) of guitarists Glauber Kiss de Souza, Daniel de Souza Mendes, Pedro Guerreschi Paiva, and Igor Dornelles Mendes (since replaced by Dino Beghetto). "Consists" is key, as the quartet follows the archaic definition of the word—meaning "to exist together"—to determine the flow of information passing through its instruments. Such unity of purpose is what distinguishes Improcreations in practice from what it might seem in theory. In concept alone, one might expect a noise-oriented project. What emerges is instead distilled, almost fragile, and welcoming.

The musicians style themselves as "four people in a collective unconscious," and perhaps no description better encapsulates "O.U.a.T.i.Po.A," the first of the album's four tracks. The title is an acronym for "Once Upon a Time in Porto Alegre," where the musicians first cohered as a unit. Its sounds constitute a quiet awakening, like sunlight coaxing the eye through tangled leaves. It grasps the tail of a fading dream, where heat of dragon's breath and blushing magma linger briefly along the skin. Whatever topical associations we might feel, however, the core philosophy at hand is deeply internal, these guitarists seeming more like biologists monitoring the brain activity of a newly discovered species. The painstaking microscopy of "0002," for that matter, pushes aside hints of other songs to something less melodic than it is cardiographic.

All of which makes the relatively straightforward pulse of "TrVdIcI0nVl" (Tradicional) even more healing. After amplifying every fracture of the bones revealed by the previous two X-rays, here we are immersed in a frenzied amplification of the healing process. The energy is propulsive yet doesn't (nor does it wish to) dominate. This leaves only "Terremoto" (Portuguese for "earthquake") to map a minimal, subterranean calm. Over the course of its 22 minutes, it builds with patient cartography, and proves that taking to the skies has romantic appeal only to those who are bound to land.

Improcreations is a welcome addition to any improvisation-lover's library, refreshing for the level of attention it requires. This is music that needs a quiet soul and an even quieter room, a misunderstood beast who wants nothing more than to create beauty.