BY GLENN ASTARITA
March 1, 2000
Sign in to view read count 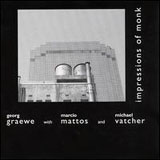 Not often will you hear Thelonius Monk's music performed in the manner that is represented on Impressions Of Monk by the Trio consisting of pianist Georg Graewe, bassist Marcio Mattos and drummer Michael Vatcher. Following up their extraordinary and largely improvised freshman release for "nuscope recordings titled, "Subsymbolism , the group take on Monk's work in ambitious fashion although these translations may seem a tad unconventional to Monk purists.

Throughout, the musicians deconstruct and reinvent several well-known Monk compositions primarily exercised as vehicles for improvisational episodes, that contain a fair amount of bump and grind, passionate exchanges and diverse rhythmic interludes. On Monk's "Trinkle Tinkle , Graewe playfully exaggerates the familiar theme while also molding disparate concepts and elements into the main fabric or framework of the rhythmic flow and melody line. Frisky yet focused interplay prevails as the band interprets Monk's tricky chord progressions and odd-metered time signatures to their advantage. Graewe's flailing left-hand right-hand arpeggios and huge block chords entice Vatcher and Mattos to pursue intense rhythms at a seemingly impossible or unlikely pace. The band swing and meld free-bop style motifs on Monk's "Off Minor as Graewe injects Bud Powell-like, blistering right hand leads here and elsewhere........ With "Coming On The Hudson , the Trio purvey subtle dynamics and crisp rhythms as all hell eventually breaks loose. The musicians perform an engagingly distorted yet sonorous and bluesy version of "Work while continuing along similar paths on several of these renditions of Monk classics.

Without further ado, Impressions Of Monk is a stylish effort from a band who continue to redefine the art of the "" Modern Jazz/Improvising Piano Trio "" as they seek out previously uncharted terrain while having a little fun during the process! Recommended....* * * *

All compositions by Thelonius Monk