By JOHN EYLES
December 6, 2014
Sign in to view read count 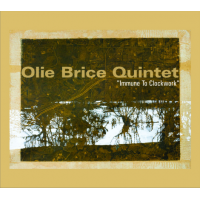 For some time, bassist Olie Brice has been a highly-regarded member of the London improvising community, so it is a genuine pleasure to welcome Immune to Clockwork, his debut album as a leader. Many ingredients combine to mark out effective band leaders from the less successful ones; on this showing, Brice ticks enough boxes to indicate that he is well suited to the role. Firstly, a leader must have the knack of selecting band personnel who combine together effectively; that is not just about recruiting good players but also about having a sense of the chemistry between them. (Yes, we can all cite examples of fine players who failed to shine in a band because the chemistry was wrong, can't we?)

There are no such issues here. Brice's choice of the frontline of Mark Hanslip on tenor saxophone, Alex Bonney on trumpet and Waclaw Zimpel on alto clarinet was inspired, particularly as Brice, Hanslip and Bonney had history together in quartets with drummer Mark Sanders or with this quintet's drummer Jeff Williams. The addition of the Polish rising star Zimpel ensures that the other four do not slip into well-worn habits and so keeps this group sounding fresh. Each of the voices in the front line is distinct enough to be a recognisable individual stylist but mainly they act as a unit rather than individuals, giving one another space to create. And as a quintet, they sure do have the required chemistry.

A second vital task for a band leader is to select material—band compositions or covers—that brings out the best from all concerned. The seven tracks here are all originals by Brice himself, and they allow everyone to shine, individually and collectively. Crucial to the success of the music is that it never sounds formulaic—no predictable "head-solos-reprise" patterns here—but allows enough looseness to keep band members (and listeners) in the moment and on their toes. Brice's compositions do feature ensemble passages, but these never seem to straitjacket or limit the players. As the album title may be intended to hint, no-one here sounds as if they are clockwork...

A contributing factor to the looseness of the music is the absence of a harmony instrument—piano, guitar or vibes—from the line-up. Just as important is the role played by Brice and Williams. They fulfil the important function of a rhythm section, keeping time without being intrusive or rigid. They also act as vital, dynamic members of the quintet who are just as important as the front line. Together or separately, they underpin the music with occasional timely nudges that maintain a comfortable balance between loose and ramshackle. Consequently, at its best, the quintet's music is a constantly shifting and developing conversation between the five musicians to which all of them contribute equally, with occasional solo interludes but no-one being unduly dominant. As a debut album, this is as good as anyone could hope for and promises much for the future.