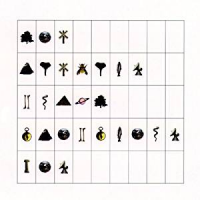 One of the first things remarkably noticeable about The Pat Metheny Group's 12th album together is the artwork. Over a number of their albums together, The Pat Metheny Group has made an evolution out of their 'glyph imagery' and I would suppose it is only symbolic of the new recording released on October 7, by the Warner Brothers Record Company. As a note on the glyphs, I have taken the liberty of associating the characters to letters from the alphabet and find some of the artist's chosen images to be both amusing and in some cases a bit disturbing. If you own the record, take the cover and translate the symbols on the cover to "Pat Metheny Group Imaginary Day." Working with that as your template, go to the CD tray card and go for a translation.

While this design is a nice puzzle, the music of the group I always felt was better suited to the dreamy and imaginative photo montages found in Travels, Secret Story, Bright Size Life, Watercolors and especially the beautiful and haunting Beyond the Missouri Sky.

Aside from the design, what you have here is a recording that offers the long-time Metheny enthusiast another journey filled with enjoyable twists and turns, without a ton of the looping and easy listening we heard on We Live Here, and more of a journey than is evinced on the contained but reflective Quartet recording.

Aside from the journey offered here, the recording is a gem for what it presents in new sounds and tones. From the opening title track, the listener is introduced to the fretless acoustic guitar. The unique tone, which has always distinguished Pat and made him a source of imitation in the genre, offers a new and refreshing color to his and the Group's music that will hopefully lead us to new places in the future. Also on the first track, which I noticed upon a second listening of the recording, but also discovered neatly inserted in my factual press kit was a synthesizer solo by long time Metheny collaborator and Group member, Lyle Mays, which is his first since the definitive, "Are You Going With Me" from the 1981 Offramp and subsequent live recording, Travels.

Throughout the first part of the recording the listener is invited on a trip led by the Group and is rarely diverted with the exception of the too radio friendly "Follow Me" which in its second track placement certainly risks derailing the listener. Upon arrival at track 7, "The Roots of Coincidence," the listener encounters a connection via the Internet. Remarkably, I have not heard this before. Pat has sampled, or recorded, the sound of a phone/modem dial-up and its subsequent handshake with the server. It is unique and almost unbelievable, I even went to check my email upon hearing the connection before realizing it was on the recording and not on my computer. A quick note to the listener —do not skip to track 7 for the sample, you must go via track 6, "Across The Sky" to get there.

While I have avoided commenting on tracks individually and have intended to focus on a few unique aspects and sounds of the recording and the 'journey,' I think it's important to note that "The Roots of Coincidence" seems to be another Metheny anthem. Just as "Are You Going With Me," "Third Wind," "As Falls Wichita, So Falls Wichita Falls," "The First Circle," "Half Life of Absolution" and "Are We There Yet" have an almost out of place presence in their energy, composition and context amongst their respective recordings, it would appear "The Roots of Coincidence" is the latest of this variety. A pleasant surprise along the road.

Although my notes from the Group publicist tell me the song immediately following "The Roots of Coincidence," "Too Soon Tomorrow," was written while the Group was making the record, it does sound like the arrangement and theme may have been recollected from the Letter From Home period.

Continuing, the final track, "The Awakening," makes me wonder if this trip is supposed to be a dream or if it is something more spiritual?

As the record and for that matter the journey ends, one can only appreciate the growth this record suggests. While we will continue to miss the irreplaceable sounds of Pedro Aznar and the versatility he brought to the Group setting; the Group's re-focused attention to detail and composition, especially the consideration of the Group to record a majority of 7, 8, 9, and 10 minute songs is appreciated. The recording is fortunately not a leap for the Group, but is rather a step, a step in the right direction and an invitation for a great experience and an enjoyable opportunity to hear some music that will hopefully be too rich for radio and is, most likely, too soon for the days of internet on demand music broadcasting.

Imaginary Day; Follow Me; Into The Dream; A Story Within The Story; The Heat of the Day; Across The Sky; The Roots Of Coincidence; Too Soon Tomorrow; The Awakening.