By Marcia Hillman
November 12, 2008
Sign in to view read count 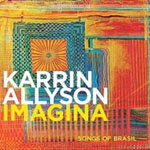 Karrin Allyson has crafted a delightful and loving salute to songs of Brazil on Imagina. As stated in the liner notes, she wanted to "sing songs I love with players that I love." And that she has done. Accompanied by Gil Goldstein (piano and accordion), Rod Fleeman (acoustic guitar), David Finck (acoustic bass), Todd Strait (drums), Michael Spiro (percussion) and Steve Nelson (vibraphone and marimba), Allyson sails through 14 selections singing in both Portuguese and English. The material has been chosen mostly from the Antonio Carlos Jobim catalogue (but not the songs that have been overdone) as well as other Brazilian songwriters. Some of the songs are done only in Portuguese, others in Portuguese and English and two in English only ("Desifinado" and "Vivo Sonando," the latter with lyrics by Susannah McCorkle).

Allyson has a voice of many colors. She can capture the delicacy of a melody and also can display a slight raspiness of tone for a more dramatic impact. Her diction is precise in both languages and she is able to convey the emotional quality of each song even if you don't understand the language. She does a masterful job of navigating her way through the lovely twisting melody of Jobim's "Double Rainbow" and a sensitive reading of the title track, the first song Jobim ever wrote. But most notable is her rendition of a true love song, "Outono (Stay)," which has a wonderfully sensual English lyric by Paul Williams.

Allyson also gives her musicians a chance to shine. Goldstein racks up several strong piano statements and makes his accordion sound like an Argentine bandoneon on Edu Lobo's haunting "Pra Dizer Adeus (Time To Say Goodbye)." Worth mentioning is Finck's lyrical bass work on "Estrada Branca (This Happy Madness) and Nelson's vibraphone on "Desafinado," which is reminiscent of Gary Burton's early '60s work with Stan Getz.

In this 50th anniversary year of the bossa nova, Imagina stands out. The Brazilians have captured the art of celebrating life in their songs and Karrin Allyson has captured the songs of Brazil in this offering.