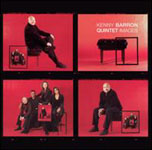 Images introduces pianist Kenny Barron's "other" quintet—vibraphonist Stefon Harris, flautist Anne Drummond, bassist Kiyoshi Kitagawa, and drummer Kim Thompson. The flute and vibes grouping gives this unit an appealingly distinctive sound that is airy but never light, sweet but not saccharine. Although somewhat limited tonally compared to the trumpet/saxophone frontline of Barron's classic five-man band, the group avoids the not improbable danger of monotony by performing a program that is rhythmically and dynamically diverse. Barron's first three compositions, "So It Seems," "Jasmine Flower" and "Inside Out," are respectively swinging, exotic and Ornette-ish. Harris' "The Lost Ones" is a moving melody of rare delicate beauty performed at an almost agonizingly relaxed pace, while Bud Powell's "Hallucinations" is flawlessly executed at a tempo that should impress even the most diehard of beboppers.

"Song For Abdullah" by Barron, a truly exquisite expression of peaceful melancholy, is followed by an uncommonly bright arrangement of Wayne Shorter's "Footprints" that balances the preceding composition's sadness with a buoyant optimism. Barron's ballad "Marie Laveau" is a romantic tribute worthy of a lady who might be addressed as Madame, while the sprightly "Missy Miss" by Harris, though similarly sophisticated with its Ahmad Jamal-inspired arrangement, is undoubtedly dedicated to a mademoiselle. The date's piece de resistance, the eighteen-minute title track by Barron, is a commissioned suite that encompasses emotions evinced on the album's earlier numbers, but achieves a greater level of dramatic intensity through its lengthier development.

Each of the young players exhibit inspiring promise, particularly Thompson, the Ben Riley prot'g' who makes her recording debut here. Barron is, not surprisingly, superb throughout, more than living up to his ever-growing reputation as one of the greatest pianist/composers of the day.

So It Seems; Jasmine Flower; Inside Out; The Lost Ones; Hallucinations; Song for Abdullah; Footprints; Marie Laveau; Miss Missy; Images.