Tierney Sutton: I'm With the Band 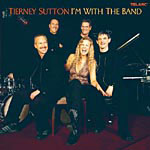 Jazz siren Tierney Sutton has produced her masterpiece. Following five well-received recordings, Sutton has done two things that ensure the superb quality of her new recording: one, she and her band perform live; and two, she fully integrates herself into the band, where all members exist as equals.

Tierney Sutton has made a dent in the jazz market by releasing smartly conceived concept recordings, usually focusing on a single artist. Introducing Tierney Sutton (Challenge, 1998) was an initial affair that honored Frank Sinatra. Unsung Heroes (Telarc, 2000) offered a program consisting of jazz standards most commonly considered instrumentals (thus its ironic title). Blue in Green (Telarc, 2001) paid homage to Bill Evans, while Something Cool (Telarc, 2002) showed Sutton stretching her repertoire to include Patsy Cline and Nat King Cole. Dancing in the Dark (Telarc, 2004) was Sutton's overt tribute to the Chairman of the Board.

I'm With the Band takes everything Tierney Sutton has been doing on these discs, throws it in the air, and allows the results to fall where they may—live. A vocal gymnast, Sutton carries the lyrically elastic torch of Betty Carter. Her control and technique make her voice (through vocalese) an instrument in her band, not in the cliched singing sort of way, but in the real scat sense. This becomes apparent right out of the chute with her lengthy introduction and scat solo on the wonderfully upbeat and off-kilter "Softly in The Morning Sunrise." On "S'Wonderful," Sutton performs in a trio with bassist Kevin Axt and drummer Ray Brinker (also on "Shat A Little Moonlight can Do"), all of whom free-form their way through the Gershwin brothers' classic. "Between the Devil and the Deep Blue Sea" is serpentine and creamy. "Two for the Road" is lazily balladic.

When not displaying her considerable vocal abilities, Sutton celebrates the talents of her longtime bandmates, effectively elevating them to equals on this recording. Christian Jacob plays splendid piano throughout, harmonically anchoring the group. Bassist Kevin Axt and drummer Ray Brinker comprise a crack rhythm section which maintains a hard swing throughout. While the program may be heavy on the Sinatra, it's great to hear this repertoire performed in such a fresh and inventive way.

Softly, as in a Morning Sunrise; Let's Face the Music and Dance; 'S Wonderful; Between the Devil and the Deep Blue Sea; Two for the Road; East of the Sun (and West of the Moon); People Will Say We're in Love; If I Loved You; Surrey with the Fringe on Top; Cheek to Cheek; Blue Skies; I Get a Kick Out of You; The Lady Is a Tramp; What a Little Moonlight Will Do; On My Way to You; Devil May Care.