Rick Blessing: I'm Just The Guy For You! 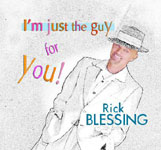 It takes a bunch of chutzpah to create a musical persona and bring it off on disc and in an on-stage act successfully, and singer Rick Blessing has essentially done just that. His preferred ambiance on this debut album is the comfort level of a Frank Sinatra mid-Twentieth Century crooner. Pictured on the album's artwork, and included in the photos, is a snapbrim "Ring-A-Ding-Ding" hat along with a hipster picture of two-toned shoes somewhat akin to those retro swing groups of the 1990s. The most important aspect of this album is that Blessing has taken it upon himself to write all of the music and provide a peerless supporting combo.

Starting off with his best, the title tune "I'm Just the Guy For You!," Blessing is cool, confident and swaggers a bit like the songs that rolled off the pens of Jule Styne and Sammy Cahn in the early 1960s like "Come Blow Your Horn" and "Here's to the Losers." Not all of the songs are that memorable but neither are they missteps. The beautifully hewed ballad, "Wonderful You," ends the session with a touching trumpet solo from Ron Stout. Although there is a piano in this sextet, West Coast guitarist Larry Koonse provides some fine chordal support on several songs, making the tunes sound even better.

Blessing's vocal style lies closest to that of Michael Bublé with the exception that the latter is more of a pop singer who prefers full-blown orchestras (as you may have viewed on his PBS specials) while Blessing stays with the small combo sound, giving him more of a jazz-shaded edge. A few of the standout titles include "The Girl on the Next Floor Up," the mid-tempo late night tune, "Love Rules Tonight" and the exotic "Mexico."

How this comes off in person is unknown, but if the music is any indication, Rick Blessing has a real talent as a writer/singer and performer.

I'm Just The Guy For You; Off The Tracks; Love Rules Tonight; Little Samba Serenade; Melanie; Mexico; Jazzman; The Girl On the Next Floor Up; Mr. And Mrs. Smith; That's The Boulevard; Lover's Holiday; Mostly Mental Me; Martini Thumb; Wonderful You.