BY GLENN ASTARITA
September 11, 2013
Sign in to view read count 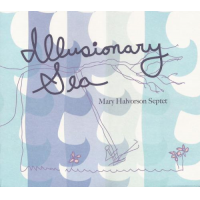 Guitarist Mary Halvorson's signature sound and methodologies have been making an impact within avant-garde and progressive-jazz circles on a global basis. Illusionary Sea marks the debut of her septet, comprised of impressionable players often residing at the forefront of the newer kindling of what may loosely be classified as jazz. Here, like minds coalesce for an album that crosses jazz, classical and avant-garde frontiers, via Halvorson's intriguing compositions and oscillating, wave-like arrangements that rarely inhabit a continuous plane.

The guitarist steers the festivities with unorthodox chord clusters and nimble single note lines that sometimes drift into the ozone on her liquefying fade-outs. Many of these works are cohesively structured to complement the improvisational element. With quaintly organized melodies and cheery themes, it's an adventuresome gala, as the septet crosses borders amid variable tempos that ride along a bouncy path.

"Red Sky Still Sea (no. 31)" is a temperate blues driven piece, featuring soft horns and a flourishing line of attack. But many of these works tender variable levels of intensity and pitch, constructed with intersecting passageways and layered horn arrangements. It's a polytonal endeavor that toggles between conventional modern jazz practices, with free form soloing jaunts, and classical-type austerity.

Nascent trumpeter Jonathan Finlayson's passionate and articulately expressed solo on "Fourth Dimensional Confession (no. 41)," is tinted with regal progressions, riding atop the offbeat background deviations by the hornists and drummer Ches Smith's rolling toms patterns. Yet this piece eventually emerges as a thematic opus, perhaps conducive for a cinematic musical score, and Halvorson's brisk linear lines and slurring choruses generate an off- the-wall outlook. However, the storyline equates to a rite of passage of sorts.

Halvorson's technical mark of distinction and multidimensional compositions are complex, yet uncannily attainable, even when considering the outside jazz perspective. We can only imagine what looms ahead for this extraordinary artiste.