BY GLENN ASTARITA
February 13, 2015
Sign in to view read count
Track review of "Beauty And The Beast" 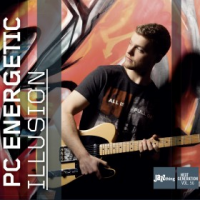 Young German guitar-slinger Philip Czarnecki's influences derive from the rock and jazz idioms, duly exercised on his quite laudable debut album. He communicates a comprehensive scope and vivid imaginative powers via a mature outlook while working within hard-hitting jazz fusion, funk and slamming rock grooves. His fluent jazz articulations and shifting thematic overtures pose a sense of excitement. The guitarist often switches gears and steps on the effects pedal amid climactic motifs, fast-paced burnouts, and knotty time signatures. Czarnecki must also be applauded for presenting a program etched out with variegated platforms. Therefore, the band mixes it up with a throng of contrasting persuasions and multidirectional contexts.

The core trio melds jazz, funk and rock on the multifaceted piece, "Beauty And The Beast." The guitarist opens the gate with warm jazz phrasings, nurtured within an understated melody. Moving forward he generates some pizzazz, directing the band into a funkified and booming 4/4 groove, accelerated with steamy upsurges while floating his solo spot atop the jaunty rhythms. Czarnecki's animated lines counterbalance Jonathan Ihlenfeld Cuniado's thumping bass patterns, formulating an off-center bridge section, where the leader builds tension and pokes holes into the primary theme with scratchy voicings and fleet-fingered runs.

Illusion is Vol.56 in Netherlands-based Challenge Records—Jazz Thing: Next Generation catalogue, highlighting young talent with significant voices. And while several of these Next Generation releases don't knock it out of the park, when considering the anticipated maturation and development processes at work, Czarnecki's impressive technical acumen and compositional savvy yield gratifying outcomes.