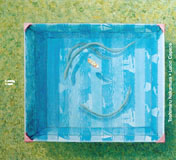 On paper, "no input mixing board (the output from the board is connected directly to the input, creating an electronic feedback loop) sounds like an unpromising instrument to play; at best very limited, at worst a non-event. Surprisingly, in the hands of its pioneer, Toshimaru Nakamura, it has become a seemingly limitless source of rich sounds which variously display the qualities of pure tone sine waves, white noise, synthesized sound, acoustic feedback and more. Often, it is tempting to describe the sounds by analogy—a hiss of steam, the chatter of jungle insects, the throb of an outboard motor. A temptation better resisted.

Arguably, Nakamura is heard to best effect in duos. In larger ensembles, his sounds can become lost, and difficult to fully appreciate; solo, they can sound as if they need some contrast, something to react to. Certainly, his duos with John Butcher and Keith Rowe are highly recommended. Ij can now be added to that list, as Nakamura pairs up with Berlin-based Argentinean saxophonist Lucio Capece.

On the first of the two long tracks here, for much of the time Nakamura lays down a drone, sometimes modulated to produce a rhythmic effect. Over this, Capece adds some minimalist sounds using pad noise and the merest hint of reed sound, with occasional feedback as punctuation. However, this is not music that should lull one into a false sense of security; ambient it is not. Just when it seems as though nothing much is going to happen, an awesome screaming surge of sound looms up out of nowhere, to thrilling effect.

The second piece opens with a long-held note from Capece, soon followed by some call-and-response between the two, Capece's low level mouthpiece noise drawing forth electronic spikes from Nakamura. The music evolves through a range of such responses, with the sax seemingly leading the way, culminating in a deeply satisfying section that matches bass clarinet with low frequency pulses.

The music is immensely subtle, and reveals added details and nuances with every listen. Not easy listening, but very rewarding of time invested in it.

Visit Toshimaru Nakamura and Lucio Capece on the web.