Home » Jazz Articles » Klaus Holm Kollektif: What Was That You Said?

Klaus Holm Kollektif: What Was That You Said?

By Eyal Hareuveni
January 26, 2008
Sign in to view read count 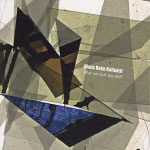 The Kollektif is the third incarnation of Norwegian reed player Klaus Ellerhusen Holm's group. Holm was awarded as the Young Nordic Jazzcomet in 2003 and is a member of bassist Ingebrigt Håker Flaten Norwegian Quintet, Zanussi 5 and Geir Lysne Listening Ensemble. His current Kollektif members—bassist Ole Morten Vågan (Motif, Bugge Wesseltoft New Conception of Jazz, Håvard Wiik Trio, Maria Kannegaard Trio), and drummer Ole Thomas Kolberg (who has recorded with American saxophonist Sonny Simmons)—began working in 2003 as the Megatsunami trio. Due to the horrific Tsunami that hit South-East Asia three years ago they changed their name to Roundtrip and recorded their debut, Two Way Street (Jazzaway, 2005). Now, augmented with Swedish vibraphonist Mattias Ståhl, with whom Holm plays in another free-improvised quartet, the trio is reformed as the Kollektif.

As on Roundtrip's recording, Holm is still responsible for most of the compositions, the debts to the legacy of Eric Dolphy and the influence of Simmons—who collaborates regularly with Norwegian musicians—are still apparent. But this Kollektif manages to develop its own aesthetic; more on the outside, it is still based on the challenging free-jazz vocabulary, with many more rhythmic possibilities to explore with the addition of Ståhl, yet still on the inside too, in a surprisingly accessible and humorous manner.

The Kollektif swiftly shift between loose rhythms, Holms' elliptical sax outbursts, the assured interplay between Holm and Ståhl, and the tight energetic playing of Vågan and Kolberg. On tracks including "Loose Changes," "Yekoms Nagåv," "Something for the Ladies" and "Not Now Cato," the Kollektif presents an updated perspective on the innovative musical language of Dolphy. Even if the Kollektif lacks a charismatic trumpet player it's impossible to avoid comparisons to Dolphy's classic Out to Lunch (Blue Note, 1964), though Holm's sound is different—fierce and almost violent but, like Dolphy, abundant with ideas.

On tracks like "What Was That You Said?," "Sweet and Sentimental" and the beautiful "No Bjørk," the Kollektif feature Holm's intelligent compositional skills, that can be emotional, sophisticated and almost song-based. Others, like the spare "Wally C," feature the new rhythmic sonorities of Kolberg and Ståhl, which expand the Kollektief's sound envelope.

What Was That You Said? also features a series of three short interludes and one variation, chamber-like in their spirit, that focus on developing a cinematic texture, like the duo of Holm, on clarinet, and Vågan on "Interlude 2," or the brief rhythmic concept of Ståhl and Kolberg on "Interlude 3."

Title: What Was That You Said? | Year Released: 2008 | Record Label: Jazzaway