Richard Galliano featuring Gary Burton: If You Love Me (L'Hymne a L'Amour) 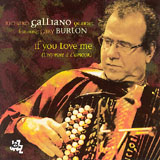 Fifteen years after his death, tango legend Astor Piazolla's influence continues to be felt. Both accordionist Richard Galliano and vibraphonist Gary Burton have released tributes to the late composer/performer, and so it's no surprise that the two have joined up to mine Piazolla's music and more on If You Love Me (L'Hymne Ã L'Amour). They explore the paradoxical romanticism and melancholy of tango, but also delve into music as far-reaching as singer Edith Piaf, composer J.S. Bach and pianist Bill Evans. Defined by elegance and grace, it possesses the kind of near-perfection that's defined both musicians' careers.

Bassist George Mraz, a well-traveled but often undervalued player, works alongside drummer Clarence Penn, whose breadth as a player becomes more evident with every new project. Here Mraz and Penn are all about support and subtlety, with Penn playing so lightly at times that it feels like he's breathing on his drums rather than hitting them. If one sign of the compleat musician is the ability to place music ahead of ego, then it would be hard to find a better rhythm section.

With Mraz and Penn providing the kind of support that leaves Burton and Galliano in a position of complete trust, the vibraphonist and accordionist are able to deliver dramatic performances that never become melodrama, and lyrical simplicity that never becomes mundane or predictable. When in accompanist role, each works with Mraz and Penn to explore dynamic nuances in ways that are, at times responsive, at other times driving. It may begin as a brooding and spacious slow-tempo tango but Burton's vivid solo on Piazolla's "Milonga is Coming" builds in intensity—with Galliano and Mraz pushing the beat—before dropping out for Burton's a capella spot that's a remarkable mix of understatement and virtuosity.

It's not all about melancholy, however, though it often finds its way into even the most buoyant of tunes. Piazolla's genius was the evolution of a relatively straightforward dance form into near-classical episodic complexity, with the shifting tempos and moods of the relatively brief "Triunfal" a prime example of writing that could be at once joyful and reflective of despair. Galliano and the quartet navigate Piazolla's complex material with natural and effortless aplomb.

Edith Piaf's title track is a more straightforward ballad, but Galliano's expressive accordion gives it new life, along with Burton's ability to find new melodies within even the most conventional of changes. Galliano and Burton transform Bach's "Sinfonia 11 in G-Moll" into a jazz waltz. Bill Evans' enduring "Waltz for Debby" is taken at a surprisingly fast clip, while Galliano's "Para Jobim" is a decidedly reverential bossa.

The diverse program of If You Love Me succeeds in contextualizing Piazolla's work within a larger jazz continuum. Sweet but never saccharine, it's an album that's easy on the ears but never lacking in substance.

Milonga is Coming; Triunfal; L'Hymne a