Tim Garland: If the Sea Replied 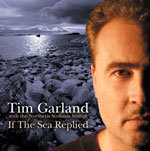 He's still in his early forties, so it may seem premature for British woodwind multi-instrumentalist Tim Garland to create a consolidating work that summarizes his musical experiences to date. But Garland's involvement in projects like the contemporary post bop of Chick Corea's Origin and Bill Bruford's Earthworks, the chamber jazz of his own Storms/Nocturnes trio, and the Celtic-meets-contemporary jazz of the now-defunct Lammas suggests he's already covered significant territory.

Even that's only part of the story. Garland has been immersed in classical studies, in addition to citing stylistic genre-busters Oregon and Paul Motian Trio as seminal influences. If the Sea Replied is an ambitious, sprawling suite that uses lighthouses and the sea's grace and power to bring his multifarious concerns into remarkable focus.

Garland's 'no boundaries' combination of small group jazz, chamber music, ambient impressionism, and folk-informed improvisation could only work with like-minded players, and in pianist Gwilym Simcock he's found the perfect complement. The twenty-something Simcock, increasingly in demand on the UK scene, has only recently come to jazz from a formal classical background. In his John Taylor-like combination of lithe lyricism and denser harmonies, his ability to combine improvisational élan with formal structures more akin to classical composition allow him to mesh seamlessly with Garland's conception.

But despite unassailable roots, Garland is no mere imitator. His writing style becomes even more vividly personal on tracks like "The Machine," blending the Northern Sinfonia Orchestra's strings, samples of an interview with Britain's last lighthouse keeper, and Garland's robust bass clarinet in a true case of reverse engineering. Recording a series of improvisations in an actual lighthouse—combining close and distance miking to capture the ambience of the structure—Garland then composed orchestration around these solos. Holst-like moments of drama contrast with more delicate and abstract impressionism as Garland lends credence to the concept that improvisations are truly spontaneous compositions.

Those who might accuse If the Sea Replied of lacking substantive jazz credibility need only look to the powerful "Storm Warning." Here a maelstrom of sound ranges from introductory wild free play and a brief Coltrane-inspired duet between Garland and Sirkus to a more atmospheric coda combining spoken word, strings, and electronic sound samples.

Still, If the Sea Replied won't fit a conventional jazz definition, because it combines complex form and orchestral textures, avoiding more traditional devices. But its underlying reliance on interpretive improvisation evinces its ever-evolving nature. Garland's refusal to surround music with predefined borders results in a uniquely captivating and expansive experience that deviates from closed-minded preconception and defies easy categorization.