Home » Jazz Articles » Jeremy Udden's Plainville: If the Past Seems So Bright

Jeremy Udden's Plainville: If the Past Seems So Bright 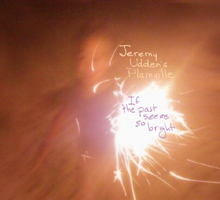 Named after his rural Massachusetts hometown, Plainville is Brooklyn-based saxophonist Jeremy Udden's heartfelt roots music-inspired project. In the New England Conservatory graduate's own words, "I listened to a lot of rock growing up, I continue to do so. So a lot of my music is about reconciling that...." From singer-songwriters like Neil Young to alt-rock icons The Pixies, Udden's musical influences run the gamut, much like those of his peers and fellow band mates. If the Past Seems So Bright follows in the footsteps of the band's self-titled 2009 debut on Fresh Sound New Talent, traversing rustic Americana vistas with cinematic élan and indie rock credibility.

Throughout the date, Udden constructs dynamically inventive extrapolations from unadorned themes, soaring with understated euphony over the lilting banjo arpeggios of "New Dress" one minute, caterwauling with acerbic abandon on "Stone Free" the next. The session also includes appearances from two guest vocalists, whose singing lends palpable conviction to the band's populist aspirations. "Bethel" features Nathan Blehar's soulful wordless harmonies, while the sober "Pause at a Lake" concludes the record with a poignant reading of Udden's lyrics by Justin Keller.

Overblown jazz fusion clichés are largely a thing of the past among younger performers like Udden, who have come of age exposed to a diverse array of genres and aesthetic approaches; Plainville is a prime example of how once seemingly disparate styles can inspire subtly tasteful new hybrids. If the Past Seems So Bright enhances sophisticated jazz structures with the emotional candor of contemporary roots music, expanding the possibilities of both traditions in the process.

Title: If the Past Seems So Bright | Year Released: 2011 | Record Label: Sunnyside Records