BY WOODROW WILKINS
December 11, 2007
Sign in to view read count 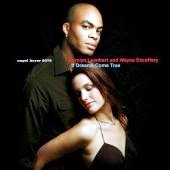 A charming vocalist with solid roots and versatility is a good thing. A saxophonist who can play with verve while also covering a variety of styles is equally good. Put the two together, and you've got a match made in musical heaven. Enter Carolyn Leonhart and Wayne Escoffery, a duo who met on Valentine's Day in 2002 and were married two years later.

Leonhart, the daughter of bassist Jay Leonhart has two prior solo releases on Sunnyside Records—Steal the Moon (2000) and New 8th Day (2005), although she may be better known as one of the backup vocalists for Steely Dan for 11 years. In fact, that group's lead singer, Donald Fagen, praises her: "Carolyn Leonhart is some swingin' canary. You never know what this chick is gonna do next. Escoffery has licked his chops as a member of the Mingus Big Band, Ben Riley's Monk Legacy Septet and The Tom Harrell Quintet. He has also led his own band and recorded Veneration: Live At Smoke (Savant Records, 2007).

The couple scores with If Dreams Come True—a collection of nine songs, co-writing two of the five original tracks. The title song is a stunning cover of Bennie Goodman's classic tune. The rhythm section of Toru Dodo on piano, Hans Glawischnig on bass and Jason Brown on drums is solid. Leonhart's voice is smooth and charming, like an old-school jazz singer who doubles as a flute. Escoffery puts this track over the top with a passionate, jaunting tenor sax solo. As if that weren't enough, Leonhart gives it an extra spark, overlaying the solo with wordless vocals and Dodo contributes a solo of his own.

The couple's own "Nothing Left to Say should be a sad song, but to hear it, one has to smile. Escoffery dons the soprano sax, underscoring Leonhart's lead and then delivering another excellent solo. Leonhart's tone is clean and unstrained, and she sustains well.

One of the cooler selections is Escoffery's "Not Without You, a dynamic instrumental that features him on the tenor, with plenty of interplay from the sidemen. Leonhart offers haunting, wordless vocals at the beginning of the track, Dodo gives a solid piano solo, while Brown and Glawischnig add their own touches in the background. After Escoffery comes back with another solo, Leonhart returns with more haunting vocals.

All nine songs surpass the five-minute mark, with several reaching beyond seven. This gives the band plenty of room for expression. Often with jazz vocal recordings, you only get one instrumental solo, if any at all. But with more time allowed, Escoffery and the other musicians stretch out without sacrificing Leonhart. Glawischnig and Dodo put their stamp on this album as well. Brown splits drumming duties with Carl Allen, each appearing on four tracks. It all comes together, making If Dreams Come True thoroughly enjoyable.

Visit Carolyn Leonhart and Wayne Escoffery on the web.