By DOUG COLLETTE
October 30, 2016
Sign in to view read count 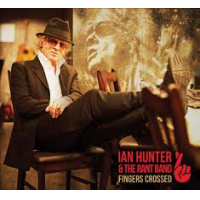 Assuming his role as chief vocalist for Mott the Hoople, then becoming its main songwriter, Ian Hunter evolved into the figurative voice for the British band as it evolved and reached its apex of commercial and critical acclaim with Mott (Columbia Records, 1973). And as he initiated his solo career, Hunter was able to tailor the persona Hunter created for the band into one equally personal to him as an individual, an approach he maintains on Fingers Crossed, his fifteenth studio album of original material solely under his own name (though his collaborations with guitarist Mick Ronson have much merit too).

It's noteworthy that, in providing detailed musician credits as prominently as his lyrics in the booklet of within the bright-hues of this CD package, the frontman also gives overall co-credit to his group The Rant Band. Ian Hunter has always been keenly aware of the sound of his songs as they appear in finished recordings, not to mention the pedigree of his accompanists: see the roster of guests who appear on All American Alien Boy (Columbia, 1976) including Jaco Pastorius as well as member of Bruce Springsteen's E-Street Band. Little wonder then that this album begins with the group en masse, with heavy chording and drumming combined with the yelling cum chant on "That's When the Trouble Starts."

But the five-piece Rant Band is also quite discernibly all in on the more song-oriented "Dandy," evoking more than superficial shades of The Hoople but appropriately so as it's homage to the late David Bowie, an early champion of Mott and producer of the album that contained their first hit, "All the Young Dudes." The admiration for that recently deceased rock icon allows the author to assume one of his favorite roles-that of a devout music fan-and provides a subliminal seque to "Ghosts:" relating as well as reliving an experience in the hallowed Sun Records studios, Ian Hunter and his quintet display no little finesse in layering the sound of acoustic and electric guitars.

The echoed tones of one of the latter instruments on the solo of the title song makes for a resonant contrast with the acoustic piano foundation rendered all the more stately via the vulnerability in the leader's singing. "White House" is a change-up in more ways than one: it's Chuck Berry-derived jocularity has nothing to do with politics, but rather the succor supplied by personal intimacy and pastoral surroundings.

Still, Ian Hunter continues to hone a singular voice as a songwriter, drawing upon Greek Mythology for the grand crescendo of "Morpheus," but also as a recording artist: "Stranded in Reality," "You Can't Live in the Past" and "Long Time" form a provocative sequence of songs that emphatically concludes an album documenting this man's continuing creative vigor—and a visceral connection with his audience—as moves past his seventy-fifth year.