Tuck & Patti: I Remember You

By Tom Greenland
December 17, 2008
Sign in to view read count 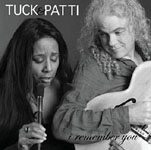 I Remember You, from guitar/vocal duo Tuck & Patti, is the first in its catalogue to exclusively feature songs from the Great American Songbook. Originally inspired by the duets of Joe Pass and Ella Fitzgerald, the pair has been a marital and musical team for 30 years, evolving a crossover sound that draws on jazz, R&B, folk, pop and new acoustic music. Jazz fans will appreciate the sensitivity and consummate craftsmanship they bring to these oft-roasted chestnuts from the standards repertoire, seamlessly blending voice and guitar, making much with minimal means.

Patti Cathcart's rich contralto, at times earthy, at others ethereal, lifts and lilts with warmth, fluidity and spiritual immediacy. While her readings of the melodies are fairly conservative, her scatted solos over "The Very Thought of You," "A Foggy Day" and "Old Devil Moon," and her bouncy riffing over the intros and outros reveal a fertile imagination.

Tuck Andress' playing combines walking bass lines, midrange chords, chunky backbeats and treble melodies that together create a remarkably lush and swinging ensemble; through delicate variations in volume, plucked harmonics, legato fingerings and a grab-bag of extended techniques, he has developed an original and highly effective style, the ultimate complement to Cathcart's voice. His work on "In a Sentimental Mood," "'Deed I Do," "When I Fall in Love" and "It Might as Well Be Spring" will be revelatory to the uninitiated.

The duo made its first appearance at New York's Blue Note on its 30th anniversary tour. The early set on November 2, 2008 included four songs from the recording, three originals and several covers. "Love Is the Key" opened, with Cathcart on solo vocal percussion. Andress dazzled on Wes Montgomery's "Up and At It" and Carlos Santana's "Europa," and the duo's rendition of "With a Song in My Heart" was so sensitive that it brought audience conversation to a standstill. The audience wasn't the only one enjoying itself—following an infectious scat solo over "Learning How to Fly," Cathcart was overheard to remark, "That was fun, Tuck!"

I Remember You; In a Sentimental Mood; 'Deed I Do; The Very Thought of You; When I Fall in Love; A Foggy Day; It Might as Well Be Spring; Old Devil Moon; embraceable You; With a Song in My Heart.

Title: I Remember You | Year Released: 2008 | Record Label: Self Produced