Diane Hubka: I Like It Here: Diane Hubka Live in Tokyo 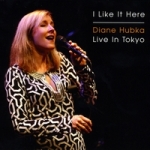 Diane Hubka has made a reputation for being a straight-ahead, no-nonsense jazz singer and guitarist. Her previous recordings—Goes to the Movies (2008, 18th & Vine), You Inspire Me (2002, VSOJAZ), Look No Further (2000, Naxos)—all reveal a keen jazz talent with a conservative singing approach and swinging guitar sensibility.

Hubka solidifies her hold on mainstream jazz vocals with an excellent live set recorded in Tokyo, December 5, 2007. Hubka is supported by the superb trio of pianist Kiyoshi Morita, bassist Masahiko Taniguchi, and drummer Nobuhiko Yamashita in a bare-bones set of standards, heavy on the Jobim.

Hubka's vocal style is characterized by a perfect midrange that fully stabilizes all registers of her voice. She eschews fancy fireworks in favor of faithful readings of the American Songbook. The value of such a singer is the listener is treated to the closest thing to what the composer intended. Opening with Alec Wilder's "I Like it Here." Hubka immediately reveals her mercuric simpatico with bassist Taniguchi. The two push and prod the other, Hubka ahead of the beat and Taniguchi behind it.

The engineering is such that the secondary resonance of the low notes are audible when Taniguchi is playing on ballads, giving his support a very broad sonic broom with which to push the compositions. The same is heard on a darkly rich "Angel Eye" and "You Go To My Head." Hubka shows what an odd harmonic duck "Moonlight in Vermont" is, singing it beautifully.

Pianist Kiyoshi Morit proves an everyman musician, capably providing Hubka the necessary framework onto which she hangs her melodies. Hubka does not find Tokyo without her guitar, which she breaks out for four of the twelve selections, most notably the Jobim compositions "Agua de Beber" and "Dindi." Hubka makes her way to into a select group of jazz vocalists/instrumentalists, where she rightly assumes a place of honor. I Like it Here is a first among equals...her finest disc.