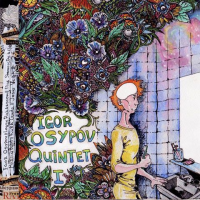 A native of Ukraine currently studying at Jazz Institute Berlin under Kurt Rosenwinkel, guitarist Igor Osypov was initially drawn to the guitar as a pre-teen via rock and punk-rock. Osypov's debut album I is, on the surface, the type of sunny, moderately complex, indie-rock inflected jazz that's the stock-in-trade of guys like Brian Blade, David Binney, Torben Waldorff, and, of course, Rosenwinkel himself. Happily, there's a lot of blood and guts evident in Osypov's playing and in his tunes. Dark undercurrents and traces of Osypov's formative rock energy and punk anarchy turn up on I in the oddest places, which only add to its overall charm.

For example, there's a brief moment towards the end of "Options" where Osypov and saxophonist Logan Richardson seemingly go microtonal in the middle of a phrase, only to return to the melody without missing a beat. On "Key For Every Door," Osypov, Richardson, and pianist Elias Stemeseder pepper their improvised 16-bar exchanges with odd and off-kilter phrases that either don't resolve at all, or do so in an odd way. It's the jazz equivalent of a bunch of kids daring each other to do something crazier than the last. The album-closing "Travel of a Lonely Ghost" is perhaps the album's most striking and visceral tune. Built on a disjointed rapid-fire rhythmic phrase, excellent boom-bap drumming, and a snaky ethnic-inspired melody, the piece elicits spectacular solos from Richardson and Osypov.

Osypov's original compositions are quite good and give a good idea of the author's artistic range. Richardson, the featured soloist throughout this engaging disc, has a velvety-smooth sound, much like Loren Stillman's, but his phrasing and note choices are bold and mercurial, a bit like Eric Dolphy. Richardson waxes soulful over brushes and thoughtful bass on "That Will Happen," a sweet'n'sour jazz ballad. Even more unusual is "Advisor," a downtempo piece that sounds like a blues that's been put into a blender with Eastern European ethnic music. The result is a seamless and quite flavorful hybrid that, harmonically speaking, never seems to go where you think it is going to go. Fortunately, Richardson, Stemeseder and Osypov are able to make sense of it all. A decided rock influence comes to the fore on the mournful "Red Parade," a moderate tempo, minor-key excursion that sizzles with restrained energy. Quicker tempos and some creatively realized odd time signatures crop up on "Dario" and "Options," both handled crisply by Osypov's nimble rhythm section. Somewhat less interesting is "Colorless," a samba-derived piece that seems like an afterthought when compared to the rest of tunes on I.

The one unsettling thing about I is its resemblance to the work of Osypov's mentor, Kurt Rosenwinkel who is, without question, a hugely influential jazz guitarist. And that's the risk inherent in working with a teacher who is also a hugely influential artist in one's chosen field: one may wind up being highly influenced. That said, I is an impressive debut that does far more than merely impress. There's some great music on offer here, and Osypov and his young bandmates are definitely names to keep an eye on in the future.

Options; Colorless; Advisor; Creator; That Will Happen; Key For Every Door; Red Parade; Dario; Travel Of A Lonely Ghost.