Jon Irabagon with Mike Pride: I Don't Hear Nothin' But The Blues 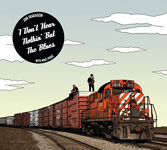 The saxophone and drum duo has long been an established jazz tradition, with Interstellar Space (Impulse!, 1965), John Coltrane's legendary duet album with Rashied Ali, widely considered the format's archetype. Containing a single 47-and-a-half minute improvisation, I Don't Hear Nothin' But The Blues is tenor saxophonist Jon Irabagon and drummer Mike Pride's bold contribution to the tradition. Released in an era dominated by shortened attention spans and internet downloads, Irabagon and Pride make their intentions clear; this is not music for the casual listener.

In addition to his own ensembles, Irabagon's work in Moppa Elliott's Mostly Other People Do the Killing has revealed a virtuoso with a wily creative streak, able to run quicksilver chord changes as readily as conjuring coruscating dissonances. Pride is known for his work with Jamie Saft, John Zorn and a host of Brooklyn-based ensembles like Dynamite Club, From Bacteria to Boys and Rocket Engine. His affinity for extreme metal occasionally pushes the session into testosterone fueled territory, but never without providing dynamic contrast along the way.

Recorded in a single take, the piece unfolds like a suite, with fragmentary themes and motifs surfacing at random intervals between labyrinthine excursions. Their spontaneous interplay invokes aspects of Dixieland, swing, blues, funk, metal, noise and even calypso over the duration, making this extended work far from repetitious.

The duo modulates gracefully between genres, maintaining thematic focus from one visceral section to another. Their discourse is relentlessly intense, varying in density and volume, but not activity. Neither Irabagon nor Pride relents at any point in the piece; there are no solo cadenzas or quiet interludes—this is a continuous conversation between two amped improvisers with a mischievous sensibility and an encyclopedic knowledge of music history.

Most contemporary saxophone and drum duets usually tend toward either short thematic improvisations or expansive free burnouts. Irabagon and Pride combine the two concepts, venturing into uncharted territory with a bracing new vision. I Don't Hear Nothin' But The Blues is history in the making.