Home » Jazz Articles » The Sursiks: I Didn't Know I Was Singing

The Sursiks: I Didn't Know I Was Singing 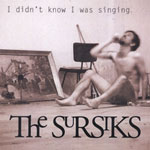 The musicality of human speech has been a point of interest for a number of composers, among them Schoenberg, Partch, and Jancek, but the craft of building compositions around carefully notated spoken word recordings remains ripe for exploration. Scott Johnson pioneered the technique with John Somebody, Steve Reich popularized it with Different Trains, and Rene Lussier arguably perfected it on Le tresor de la langue. The Sursiks' application of this compositional method, I Didn't Know I Was Singing, replicates the precision of its predecessors while adding a new and welcome ingredient to the mix: lowbrow humor.

The Sursiks' name is presumably a reference to Luis Bunuel's film The Discreet Charm of the Bourgeoisie, and their music is fittingly surreal. Using an assortment of answering machine messages as his raw material, frontman David Minnick builds musical arrangements around the callers' words, elaborating on the melodic contour of each spoken phrase. As suggested by the cover image—a naked drunk crouched beside a framed painting and a microphone, fist raised angrily to the heavens—the "vocalists" are occasionally less than sober, and are nearly always given to casual vulgarity.

The seeming incongruity of each message's stylistic accompaniment contributes to the overall absurdity of the enterprise. For example, Minnick fashions a spaghetti western pastiche replete with grunts and neighing horses for one caller's proposed song lyrics, which declare that communists Castro and Stalin "should die"—a bit late, perhaps, in Stalin's case. Meanwhile, an inebriated woman's tirade involving slashed tires is arranged as Barry White-style R&B, and a man's bizarre announcement that his wife has given birth to "a bundle, a pistol of rahina" receives the Buena Vista Social Club treatment.

I Didn't Know I Was Singing has laughs to spare, but it is far more than a novelty album. A post-bop sensibility underscores a trilogy of messages from one David Lee, whose tone evolves from hostile intimidation to humble contrition. At the opposite end of the musical spectrum is "I'll Be Guiding You," a radio-friendly rock anthem whose airplay potential is abruptly, and hilariously, thwarted by its speaker; rising to the occasion, the Sursiks make the most of the message's pornographic punchline.

The disc is subheaded Volume One, indicating that it is the first in a series of dalliances in profanity-laced prosodics. With any luck, the Sursiks will make good on that promise.

2 Saved Messages; Pork Chop Dinner; Slashin' Your Own Tires; I'll Be Guiding You; Communism Part 1; Communism Part 2; Please Call Me!; A Bundle A Pistol of Rahina; Why Don't You Try the Martial Arts?; Yo Clark, What's Up, Yo?; God Damn It Dude; Yo Mike, What's Up?; Sister!; I Am So Fuckin' Sorry; Hey Gary, This is Kirstin; Hi Gary, This is Elenore.