Home » Jazz Articles » Peter Apfelbaum's Sparkler: I Colored It In For You

Peter Apfelbaum's Sparkler: I Colored It In For You

By Dan Bilawsky
January 7, 2015
Sign in to view read count 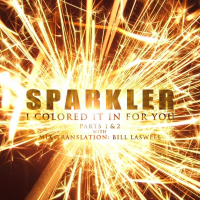 I Colored It In For You is such a tease. Broad-minded multi-instrumentalist Peter Apfelbaum uses this brief EP—the two-part title track and a remix from M.O.D. co-founder Bill Laswell are it—to introduces a sui generis small group known as Sparkler.

"I Colored It In For You (Pt. 1)" has it all, as a brief flash of ambient noise is overtaken by glistening textures and horns. Then there are vocals sung with a slam poetry slant, drum 'n' bass-ish supports, pseudo-choruses that repeatedly utter the song title and feature catchy horn riffs, and a breakdown that gives Cressman some space to blow. All of that comes and goes in less than six-and-a-half minutes. "I Colored In In For You (Pt. 2)" proves to be far more organic. In less than three-and-a-half minutes, Apfelbaum and company create a sonic space where pan-African piano and guitar sounds, pop influences, fluid bass, slick horn riffs, drum and percussion foundations, and coolly delivered vocals work well together. The Laswell remix taps into the bassist/producer's love for mixing dub music, heady beats, and alien soundscapes.

The press materials for this release call this song "a multidimensional electronic world music track," and it's hard to argue with that statement; it is, however, easy to move past it and let the music do the talking, as a scant amount of words—or any words at all—can't do this justice. I Colored It In For You is yet another example of Peter Apfelbaum gazing at a new frontier.