BY DAVE HUGHES
November 1, 2001
Sign in to view read count 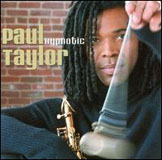 Smoooooth soprano saxophonist Paul Taylor's fourth CD, Hypnotic (his first on Russ Freeman's Peak label), pretty much nails the smooth jazz genre smack-dab in the center. His pleasing soprano, often overdubbed with harmonies, weaves sensual, pleasant melodies and lyrical solos on top of layers of programmed keyboard and drum soundscapes. He works with several different producer/programmer/all other instruments collaborators: former employer Jeff Lorber (five tunes), and Dino Esposito, Kurt Jackson, and Oji Pierce (two tunes apiece). Despite the different producers, the sound and the mood never vary much from the smooth formula. The album's title is apt; this program could easily lull the listener into a smooth, mellow trance.