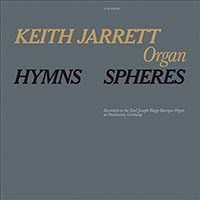 In a career well into its fifth decade, while continuing to make fine music in the new millennium, looking back at Keith Jarrett's discography reveals that the 1970s was a particularly important—and busy—time for the influential pianist. In that single decade, Jarrett released epochal solo piano explorations like The Köln Concert (ECM, 1975); orchestral works including Arbour Zena (ECM, 1975); and led not one but two now-legendary groups—the American quartet responsible for The Survivor's Suite (ECM, 1976) and the European group first heard on Belonging (ECM, 1974), but whose archival Sleeper (ECM) was a 2012 highlight. Amidst even all that activity, however, Hymns/Spheres stands out, as a unique recording and one with something of a history.

Originally a two-LP set, this 93-minute suite was whittled down to a very spare 40 minutes when, with the advent of compact discs, ECM began reissuing back catalog. Other titles were cut down, like guitarist Pat Metheny's 80/81 (1980), with two tracks excluded in order to allow the original double album to fit on a single disc (since rectified). But it seems clear that the decision to release Hymns/Spheres as simply Spheres (1985)—omitting the bookending "Hymn of Remembrance" and "Hymn of Release" and issuing just the first, fourth, seventh and ninth movements of Jarrett's nine-part "Spheres" suite—it was an artistic decision as well, with the objective of creating a single disc that stood on its own merits, rather than as something truncated for purely practical reasons.

Now fully restored, however, Hymns/Spheres, reveals itself to be a near-perfect recording—a continuation of Jarrett's solo piano explorations but, performed instead on Ottobeuren, Germany's Karl Joseph Riepp Organ, one with significantly greater sonic potential. Still, as profound as it was, Hymns/Spheres clearly didn't have the selling power of a Köln or a Belonging, and with considerably higher manufacturing costs in the 1980s (and correspondingly higher selling prices), the decision to issue a two-CD set would have been inherently risky.

Not that ECM has been averse to risk-taking in its 44-year history, but 37 years later, it's far more feasible to release Hymns/Spheres in its entirety. Beyond cost, in the ensuing decades it has gained its more rightful place as more than just a unique recording in Jarrett's discography, but an important one as well. Jarrett's solo improvisations have always possessed an inherent spirituality but, performed on baroque organ, rarely has it been so far to the fore. The two hymns are particularly majestic, and if Jarrett's reputation as a fearless improvisational explorer was already established by 1976, the many stops available on this baroque organ allowed him to experiment with sound as well, making Hymns/Spheres as wondrous sonically as it is a high point in the ongoing evolution of Jarrett's extemporaneous acumen.

The reissue is also a first for ECM: a mini-LP gatefold that, with the CDs in wax paper sleeves, replicates the original as closely as possible. Hymns/Spheres can finally be heard in its full (and remastered) glory, taking its rightful place as one of Jarrett's most significant recordings in its demonstration that, for this intrepid improviser, nothing is forbidden...and everything is possible.