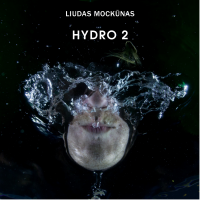 Hydro 2 is water music, but it's not to be confused with the orchestral pieces composed by George Frideric Handel back in the early 18th century. Lithuanian saxophonist Liudas Mockūnas is headed even further back in time, back to some Darwinian vision of evolution from the murky primordial seas, forward to our bipedal momentum. Note: If you happen to be a follower of creationism, you might want to skip forward a bit here. Mockūnas, who might be best known as a composer and multi-reed musician, is a member of the Konvoj Ensemble with Lotte Anker and Mockūno NuClear, as well as Rød Planet and Mockūnas/Pasborg, both with Stefan Pasborg. Additionally, he has recorded with Andrew Hill, William Hooker, and Barry Guy.

Hydro 2 follows Hydro (NoBusiness, 2017). Both are solo outings, the first a studio session released on LP, this one a CD recorded live in concert.

Mockūnas begins with the simple exchange of CO2 and O2. Carbon dioxide and oxygen are blown through his "water prepared" instrument, and the sound bubbles up from a liquid container, as if single-cell, waterborne organisms are morphing into something more complex. Heard here is, simply, life. Next, the creature steps out of water and onto land. Vociferated saxophone shouts and bellows announce this new creature. This new beast has shed its fins for legs, and locomotion has become terrestrial. Mockūnas creates a world of animals and birds with extended saxophone techniques, overblowing, circular breathing, minimalist sound generation, and ominous overtones. His technique draws from that of Evan Parker and Mats Gustafsson, plus he is evolving a language all his own. Of course, some of these new creatures return to the waters, as does the saxophonist, to bubble with this new saxophone effervescence. Meanwhile, back on land, Mockūnas first delivers a touching saxophone recital worthy of Earth's gentle people, before the sound turns into a harsh, greedy, and overblown metallic blues. An amazing 64-million years condensed into one 46-minute performance.