By Jerome Wilson
March 9, 2020
Sign in to view read count 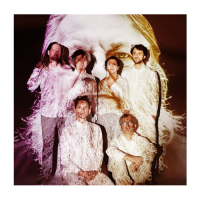 Robert Wyatt is a unique figure in modern music. He came out of Canterbury, England's music scene in the 60s, gaining his first notoriety as drummer and singer with the jazz-inclined rock band, The Soft Machine. In the 70's he briefly led a more experimental jazz-rock outfit, Matching Mole, and then moved on to a solo career before falling out of a window in 1973, an accident which has left him confined to a wheelchair ever since. His drumming days were over after that but he has carried on as a singer-songwriter in the decades since, creating music which twists though the worlds of rock, pop, and jazz with a singular blend of whimsy and poignancy on celebrated albums such as Rock Bottom and Ruth Is Stranger Than Richard.

He has influenced many musicians over the years, including drummer Max Andrzejewski, who, with his group Hütte, has created a tribute album covering songs by Wyatt and some of his friends and associates. These include instrumental and vocal pieces which feature Johannes Schleiermacher on saxophone and Tobias Hofmann on guitar, taking the lead in creating shimmering textures within the realms of jazz fusion, trebly surf rock and wistful prog rock.

Most of the singing is handled by Turkish singer Cansu Tanrikulu whose unaffected voice resembles Dagmar Krause, one of Wyatt's musical associates. She adapts well to varied settings like the singsong whimsy of "Duchess," the guitar pings and whistling of "Cuckoo Madam" and the blowsy twanging melodrama of "N.I.O." "Little Red Robin Hood Hits The Road" starts as a softly brooding mix of guitar, sax and tumbling drums but churns its melody into an ever-louder frenzy with Tanrikulu's yelps caught in the maelstrom. "Grass," a song by poet Ivor Cutler, a Wyatt friend, has Tankirulu and Andrzejewski cheerily singing in call-and-response as synthesizer and guitar squeak and flash on a raga-like melody which eventually pulls and distorts into an old-fashioned psychedelic freakout.

The instrumental selections are just as heady as the songs. On "Little Red Riding Hood Hits The Road," Hoffmann and Schleiermacher hammer relentlessly over a galloping rhythm. The final two pieces of the CD, "Instant Kitten" and "Starting in the Middle of the Day," come from Wyatt's Matching Mole days. The former is a wild, free-swinging bash with screaming sax and Jörg Hochapfel's organ brawling for space, while on the latter Hoffman's circular guitar figures flesh out a soothing line which undulates along through saxophone and Tanrikulu's wordless voice.

Those who know Wyatt's music will appreciate the way Andrzejewski's group leaves the recognizable structure of his tunes but fills and enhances them in fascinating ways. For the uninitiated, there is a feast of quirky, dreamy and driving progressive jazz-rock here which does not stray too far from its source. This music is delightful and it could well inspire one to seek out Wyatt's original recordings.