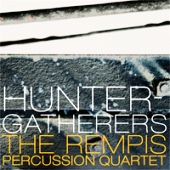 As this group has had the opportunity to come of age on record it's become clear that it mines a seam of musical territory similar to that once worked by the trio British alto saxophonist Mike Osborne had with bassist Harry Miller and drummer Louis Moholo back in the 1970s. They owe it no overt debt of allegiance, however, it's simply the case that both groups occupy a similar free space.

That's clear from the off on this two-disc set. On "A Night At The Ranch Part One" Dave Rempis is at his most effective on alto sax, spinning out lines as though his life depended on it over a percussive carpet that highlights just how remarkable it is that percussionists Frank Rosaly and Tim Daisy never get in each other's way. Throughout the set, clarity of thinking and line is a most notable element of their work even in the most heated passages.

The other track on the first disc is the even lengthier "The Bus And The Canyon" which at twenty-seven minutes has plenty of time to develop. Indeed the slow unfurling of the piece bears this out, with Rempis on baritone sax showing just how reflective he can be in an apposite musical setting. The band's unity of purpose, otherwise known perhaps as four minds thinking as one, is only too apparent here in the form of Anton Hatwich's bass. At the same time as his harmonic intimations are negligible he gives the music momentum whilst he lies at the very heart of it.

It's clear too that this is a band which has allowed itself the time and space to develop as a unit, and the music is accordingly happening on a deeply profound level.

On the enigmatically titled "More Green Than Giraffe" this is obvious. Rosaly and Daisy start things off with a brief workout full of light and shade before Rempis brings his alto sax to the proceedings again, showing also that he's learned a lesson from alto saxophonist Ornette Coleman in terms of appreciating the intrinsic value of repetition and keeping the whole virtuoso shtick to a minimum. The music breathes accordingly. This is a band that has played together to the point where the strengths and musical inclinations of the members have become symbiotic.

If a criticism could be made it's down largely to the fact that Rempis is the only horn, and as such he inevitably commands a lot of attention. Whilst there's nothing inherently wrong with this, especially when his tenor sax proves as tellingly effective as it does on the relatively brief "A Night At The Ranch Part Two," it does make for a minor shortcoming in dynamic variation.

But no matter. This is still music with a blatant lust for life put out by a quartet of individuals deeply committed to what they're doing, and that comes out in every note and tone.