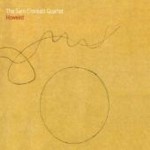 Tenor saxophonist Sam Crockatt is a founder member of London's Loop Collective, an association of up and coming musicians linked in philosophy and purpose to the city's longer established F-IRE Collective. Several F-IRE musicians—saxophonists Ingrid Laubrock and Finn Peters, trumpeter Tom Arthurs, drummer Seb Rochford, and cellist Ben Davis amongst them—are already major league bandleaders on the British scene, and some Loop members seem certain to join them before too long. Pianist Alcyona Mick's trio recently released the quietly spectacular Blink (Loop, 2008), and Crockatt's quartet here debut with a similarly deep outing, singular and assured and brimful of promise for the future.

Crockatt formed the band in 2002 with pianist Gwilym Simcock, while the two were studying at the Royal Academy of Music. Crockatt has since appeared with bands led by saxophonists Peter King, Julian Arguelles, and Tim Garland; while Simcock, with Garland and bassist Malcolm Creese a member of the chamber jazz trio Acoustic Triangle, has already begun to enjoy a measure of international recognition. The quartet is completed by two other prodigious young talents, bassist Oli Hayhurst and drummer Ben Reynolds.

Crockatt, who acknowledges saxophonists Wayne Shorter and Joe Henderson as important influences, is a grittily lyrical player with a rich, rounded tone, fruity in the lower register, more finely grained in the upper. He is capable of sophisticated rhythmic flights but complements these with earthily emphatic passages which owe more to old school R 'n' B than they do to the conservatory. His compositions—all the tunes on Howeird are Crockatt originals—include strong echoes of Shorter and Henderson, but also a characterful individuality at times recollecting the folk-influenced writing of fellow saxophonists Arguelles and Iain Ballamy. It's a winning package.

Of particular note amongst an album of consistently top drawer performances are "Project 1," "Joedecahaedron," "The Rainmaker," and "Howeird Part 1." All but the slightly shorter "Joedecahaedron," an upbeat blues inspired by Henderson's "Tetragon," last between eight and 11 minutes, allowing plenty of time for Crockatt and Simcock, the main soloists, to stretch out.

"Project 1" is effectively in two parts; its raw and declamatory theme is followed by a typically pretty Simcock improvisation, which builds, over increasingly urgent bass and drums, into a broiling backdrop for Crockatt's fierce solo. "The Rainmaker" is a lovely ballad—so lovely it's perhaps only a tad fanciful to imagine an unconscious tip of the hat to supreme tenor melodicist Stan Getz and his album Sweet Rain (Verve, 1967). "Howeird Part 1" is closer in feel to John Coltrane during his middle period Impulse! years, circa Crescent (Impulse!, 1964) and A Love Supreme (Impulse!, 1965).

As Tim Garland says in his endorsement of Howeird, the sun shines in Crockatt's fresh and alluringly straightforward music. We will be hearing more of him.