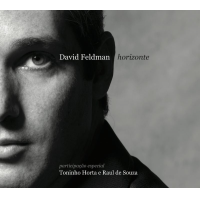 Fans of the music always remember their first aural encounters with talents of note. In the case of this writer's awakening to the wonder that is pianist David Feldman, the initial point of contact was drummer Duduka Da Fonseca's Plays Toninho Horta (Zoho Music, 2011). That date—the first of three fine outings that Da Fonseca's trio has produced for that imprint, leading the way for New Samba Jazz Directions (Zoho Music, 2013) and Jive Samba (Zoho, 2015)—served several purposes. Its primary functions were clear as day—to shine a welcome light on the titular composer's work, showcase the leader's malleable samba jazz grooves, and introduce a fledgling unit with incredible potential; its secondary function, likely unintentional, was to give the world a taste of Feldman's talents. If it was a conscious decision to put the pianist on display, all the better. You just couldn't fault Da Fonseca if he wanted to flaunt somebody like this.

While Feldman's decision to remain in Rio de Janeiro has kept him slightly off the radar, this album is a brilliant blip that should register with Brazilian jazz lovers near and far. Feldman's composing chops take center stage, his piano playing—alternately ruminative and animated—delights, and his crafting of a strong group dynamic speaks volumes about his leadership. His two previous leader dates are nothing to sneeze at, but it appears the third time is really the charm. Horizonte is truly a cut above.

A spirited take on Oscar Castro Neves' "Chora Tua Tristeza" opens the album. It's shaped as an arc of excitability with few boundaries, putting forward a pliable trio and showcasing zestful piano work with shades of Chick Corea coming in and out of view. Bassist Marcio Bahia and drummer André Vasconcellos prove to be immediate assets there, completely in line with Feldman's way of thinking. The mood changes drastically with the arrival of Feldman's rueful and stately "Melancolia"—the most mournful and downcast design on the album—and the spellbinding "Navegar." Then things take another notable turn as the guests arrive. "Tetê," a dreamy bossa ballad, features the gorgeous blend of Feldman's piano and the distinguished Toninho Horta's breezy vocals and guitar; "Sliding Ways," highlighting trombonist Raul De Souza's fluid and lyrical horn work, presents in samba-esque fashion; and "Soccer Ball," a cheery Horta number penned for the 1994 World Cup, brings the core trio and both guests together for some high times.

The tracks beyond or between those others all prove to be memorable in different ways. Feldman's "Esqueceram De Mim No Aeroporto," for example, is playful and bluesy, with a surprising harmonic twist or two in the form. And his "Adeus" charms with its beautifully lyrical melody. You feel like you already know it on the first listen, as it comes at the ears like a wonderful memory from childhood that sits just out of current reach. The song is six-plus minutes of pure contentment. Horizonte has more impressive music to offer than that penultimate piece, but nothing more affecting.

We still have a long way to go in 2017, but it's already safe to say that this record is in the running for Brazilian jazz album of the year. It certainly has my vote at this point.