By Bruce Lindsay
December 21, 2011
Sign in to view read count 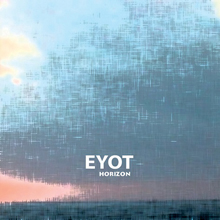 Formed in 2008 by pianist and composer Dejan Ilijic, EYOT creates a distinctive and rather beautiful sound based on a mix of jazz, prog rock and contemporary classical influences. The Serbian quartet's debut, Horizon, recorded in November 2009, is a collection of nine Ilijic tunes, showcasing his sparse and surprisingly delicate approach to composition.

The band is adept at building each tune gradually, layering sounds on top of each other with restraint and creating real tensions. Often this involves bassist Marko Stojiljkovic and drummer Milos Vojvodic playing a repetitive, insistent rhythm over which Ilijic adds his piano lines. Sladjan Milenovic's guitar, often coupled with electronic effects, is used effectively to give additional color and dynamics to the music.

It's a consistently successful approach. The tension created on "Stone Upon Stone Upon Stone" becomes almost unbearable but still keeps the attention, while the lengthy and delicate "Surge" builds almost imperceptibly around Milenovic's fragile and controlled guitar solo. "Whale Song" creates a sad, almost desolate, soundscape and contrasts effectively with the happier and more up-tempo opening to "It's Time To Go Home."

There are a couple of exceptions to EYOT's approach. The lovely though brief "If I Could Say What I Wanted To Say" features Illijic's spacious and romantic piano, supported by some subtle touches from Milenovic's guitar. "3 Months Later," with guest trombonist Vladan Drobicki and saxophonist Vasko Bojadžiski, begins typically, with Ilijic's rolling piano motif, before Vojvodic emphasizes the 4/4 rhythm with a solid drum beat, which is soon echoed by the bass. Once the trombone and tenor saxophone enter, however, the tune takes on a much freer pattern, with an assertiveness to the sound that also darkens the tune's mood until Ilijic's piano motif returns.

The low-key, almost minimalist sound of Horizon is refreshing—the sound of a band that knows how to hold back, and realize how effective such an approach can be. EYOT has made an emphatic and impressive recording debut.