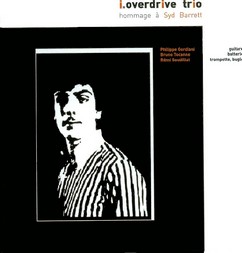 I.Overdrive Trio Hommage à Syd Barrett is a tribute to the late instigator and creative impetus for early Pink Floyd, often regarded as the 1960s' master of popular musical experimentation. Along with the very familiar tunes and frequently accurate reproduction of original timbres, the French trio subjects all songs to extremes of interpretation, while investigating a selection of Barrett's work from 1966 to 1969.

Given the composition of this versatile trio—guitarist Philippe Gordiani, drummer Bruno Tocanne, and trumpeter Remi Gaudillat—its challenge is to replicate or reinterpret the originals' vocal or compositional moods. The most powerful of the Pink Floyd's early ventures into spacey instrumentals for which the group would became so renowned, "Astronomy Domine," is a prime example, where the original's incipient chaos is preserved and the feeling of hypertension is maintained, but I.Overdrive Trio gives full rein to investigate the tension and release, through the medium of its new orchestration. Likewise, "Wolfpack" features a drum solo over a staccato guitar manipulation (a pickup switch intermittently operated), and bears little resemblance to Barrett's original story of ostracism and pain. But a feeling of deathly lethargy permeates the intermittent drums and the howling minimalist guitar recollects the original with chilling poignancy.

While the album lacks reworkings of Barrett's early successes in the singles chart, 12 of his haunting and often bizarre compositions are offered, mainly selected from his two solo albums as well as Pink Floyd's first LP, Piper at the Gates of Dawn (Capitol, 1967). Barrett was strongly influenced by his exposure to AMM's guitarist Keith Rowe in London in 1966, and here Gordiani too utilizes a variety of approaches (rhythm, lead, acoustic and highly electric) often finding the tones of 45 years ago, but without reliance on effects which soon became such a Floydian trademark.The interplay of raw guitar with Gaudilatt's sparse, pure trumpet is at first hard to reconcile with the originals, but soon takes on its own identity with the trumpet's plaintive phrasing often replicating the sense of Barrett's own morose vocals.

The minimalist presentation on France's Cristal Records should not disguise the quality of the musicianship nor the intriguing nature of this reinterpretation of gems created by Barrett, the original commander of the British space cadet corps, an unfortunate victim of those heady artistic times.