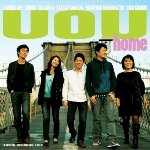 The long and interesting road for five students—from Japan to Berklee College of Music in Boston, and then to New York's exhilarating jazz scene—arrives at their splendid group recording, aptly titled Home. The band, named UoU, consists of members who have garnered numerous individual recognitions and awards, and studied/performed with a who's who's list of today's jazz leaders. Yet, as collective, this debut exudes a polished distinctiveness, clear abilities and original compositions.

It would be easy to dismiss UoU as just another American-influenced expat jazz band, but as the music unfolds it becomes clear that there is much more at work. The group's synergy is unveiled through immersible compositions—soulfulness along with technical viability; varied musical elements; memorable individual solos; and a panoptic band aesthetic that is cohesive and engaging.

Equally telling as composers, each member contributes material that accentuates the group as well as their own abilities. A fine guitarist, Daisuke Abe's "Hanauta" has a modern Americana aura, mixed with heady swing and colorful splashes of bass clarinet by Takuji Yamada. Modal shades of blue are imparted in "No Mind," written by Yoshifumi Nihonmatsu, a drummer with exquisite traps; but here, the spotlight is given to Yoko Komori's superb piano solo. Komori in turn, offers the charismatic "Queen's Dance," a tune whose melody could easily find a home on Broadway.

More West than East, the inclusion of Japanese-inspired melodies is intricately woven into the music, in contrast to the Asian American sound of contemporary jazz group Hiroshima. Gems like the lovely "As I Recall" and Abe's compelling "Ofro Song," which includes an enticing folk-song and interconnected patterns, are worthy of repeated spins. The group's musicality is cemented in "Rock-A-Bye," a rousing track that stealthily transitions from relaxation to foot stomping blues. UoU's arrival is a rewarding one, which will hopefully reach more listeners with its impressive music.