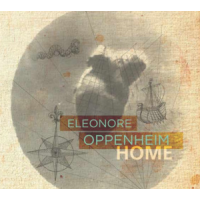 The high-concept and experimental nature of Home builds in a level of musicality that shines through peripheral effects. A big part of the charm in bassist Eleonore Oppenheim's solo debut lies in the variety of ways she uses her core instrument to interact with electronics, noises and vocal components. The Julliard alumni has worked with a wide array of artists including the Philip Glass Ensemble, Norah Jones, Meredith Monk and Steve Reich. Oppenheim also performs and records with a group called Victoire, recently collaborating with Wilco drummer Glenn Kotche on Vespers for a New Dark Age (New Amsterdam, 2015).

The roots of Home date back ten years as a project that saw Oppenheim working in partnerships with a variety of new creative music composers. The five compositions she has chosen on this recording are from Angelica Negron, Florent Ghys, Wil Smith, Jenny Olivia Johnson and Lorna Dune. On both electric and acoustic bass, Oppenheim utilizes her understated fluency of the instrument to interpret pieces that vary greatly in their range and tone.

"La Isla Magica," Negron's composition, opens with tones and pulsations flowing into the bowed bass, percussion and finally, electronic music with punchy, harmonized variations of repetitive lines. Ghys' "Crocodile" snaps and crackles following a chamber-like start, later augmented by Oppenheim's voice; sometimes speaking, sometimes singing, occasionally overlapping into an otherworldly sound. "Heavy Beating" is just that for about three minutes as Oppenheim appears to use the body of the acoustic bass as a percussion instrument before going at it with the bow. The title track, written by Johnson, is more experimental, morphing into noise, then incendiary arco playing. "Home Remix" closes Home with a slow build to a dramatic and melodic swirl of acoustics and electronics.

Home is persistent contemporary music with as much a propensity for minimalism as for impenetrable intensity. Her ability to blend acoustic, electronic and voice into a seamless and organic creation is uncanny. Oppenheim is exceedingly talented and has a strong inclination for thinking way outside the box. The result is uplifting.