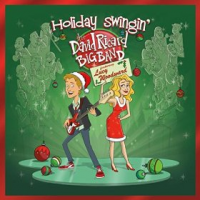 Much like last year's Holidays with a Bang!, bassist David Ricard's new big-band album, Holiday Swingin,' does precisely that, seldom pausing for a deep breath while charging through a litany of fourteen seasonal themes both old and new. If much of it seems vaguely familiar, that could be because Ricard has recycled no fewer than nine songs from that earlier album (with new arrangements, he assures the listener, and a new vocalist—Lucy Woodward, who has replaced Aubrey Logan and is heard on seven numbers). In his environmentally conscious zeal, Ricard has not only recycled most of the music, he has also recycled the album cover, replacing the words Holidays with a Bang! with Holiday Swingin' and adding a cartoon likeness of Woodward. Aside from that, it's the very same design.

As noted some twelve months ago, Ricard, best known for film and TV work on such cartoons as Tom and Jerry and The Pink Panther and Friends, is a splendid arranger who leads a first-class ensemble of Los Angeles-area musicians and adds a swinging flavor to everything on the menu, even the hallowed "Auld Lang Syne." With the emphasis for the most part on group dynamics, there aren't many solos but guitarist Matt Hornbeck, alto saxophonist Geoff Nudell, tenor Kyle O'Donnell, trombonist Erik Hughes, pianist Jordan Seigel and drummer Steve Pemberton make the most of their brief moments in the sun.

Woodward does the best she can to be heard above the din, sounding sultry and hip on "Winter Wonderland," "Jingle Jangle Jungle," "White Christmas," "Santa Claus Is Coming to Town," "The Christmas Waltz," an updated version of "Auld Lang Syne" ("We'll Wrap It Up on New Year's Eve"), and softening the mood on the album's lone ballad, "Santa's Lullabye." Ricard, meanwhile, loosens the throttle on "The Jingle Bell Cha-Cha," "The Swingin' Drummer Dude," "Swingle Bells," "Skating" and "The Merry Mash-Up" (which includes snippets of everything from "Jingle Bells," "Joy to the World" and "The First Noel" to "Silent Night," "O Come All Ye Faithful" and "The Twelve Days of Christmas").

For those who missed last year's Holidays with a Bang!, this is a bright and colorful preface to the holiday season. For those who didn't, there are some new drawing cards here (including Lucy Woodward) but Holiday Swingin' basically uses the same template mapped out for that earlier album. It's a good one, but in many ways similar to what was produced a year ago. Keep that in mind when considering what path to take.