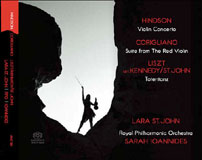 After culminating a ten-year romance with Bach, Canadian violinist Lara St. John has turned her attention to more modern fare. Not content to record another "Tchaik/Sib or Bruch/Mendelssohn," St. John has elected to debut a violin concerto by Australian composer Matthew Hindson, reinterpret John Corigliano's score for The Red Violin (1998) and put on her violin spin of Franz Liszt's "Totentanz." With this recording, St. John establishes herself firmly in the past and present, on her own terms, and with what can only be called her own special je ne sais quoi.

Matthew Hindson (born 1968) is an Australian composer educated at the University of Sydney and University of Melbourne. He takes a fresh, contemporary approach to composition without abandoning the past. His "Violin Concerto No. 1" ("Australian Postcards") (2000) is pastoral in the same way as Aaron Copland's "Tone Poems," revealing an aural portrait of his Australian homeland.

The concerto's three movements are named for specific places and landmarks. Hindson explains that his approach was to "[implement] in this piece that of 'Australian Postcards'—i.e. a set of movements that in some way reflected some Australian place or outlook. I decided that each of the 'postcards' would portray contemporary rather than historical Australian culture." The composition offers St. John plenty of opportunity to show off her scintillating technique in a way Bach could never provide.

American Composer John Corigliano (born 1938) composed the "Red Violin Suite," derived from the score of the movie of the same name (for which he was awarded an Academy Award for Best Film Score in 1999). The original recording cast Joshua Bell as violinist with the Philharmonia Orchestra ,under the direction of Esa-Pekka Salonen. St. John markedly brightens the performance under the light of Sarah Ioannides' baton, directing a very fine Royal Philharmonic Orchestra.

The 25-plus minute suite is dense with drama, accentuated by tempo and timbre changes. In St. John's hands the piece is acutely Romantic without falling into emotive excess. St. John's 1779 Salabue Gudagnini is perfectly balanced for this music composed for a film about the life of well-heeled violin.

Perhaps contrary to St. John's opinion, the violinist's adaptation of Liszt's "Totentanz" is the true center of this recording. Liszt was a virtuoso's virtuoso and his compositions were for the glory of only one: himself. But when one has talent to burn, that is okay. St. John and collaborator Martin Kennedy coax all of the Lisztian pathos from the master's dance of death. In the bargain, the two identify Liszt as an integral link between the great Beethoven and Wagner—in Liszt, those two geniuses shake hands.

St. John demonstrates the pioneer spirit in an art often thought of as dusty and drab. Her effect on the music is one of warm humidity, a frankly sensual vision seen through the lenses of certain youth, wonder, and determination. The Bach was great, but Lara St. John has much, much more to offer.